The most popular alternative medicines & therapies revealed & the states using them

America is a vastly diverse country, filled with different cultures and races among its people, in fact, the people indigenous to the land of America have always practiced natural medicine – using herbs and plants to heal ailments, definitely different from our prescription medication. However, now there are countless others, a vast array of Asian alternative medical practices and techniques, and even chiropractic medicine, originating in North America.

You might be wondering, which forms of alternative medicine are the most popular across the United States and which of its states are using them the most? Well, we at NiceRx have got you covered, as our research using Google search data uncovers just that! 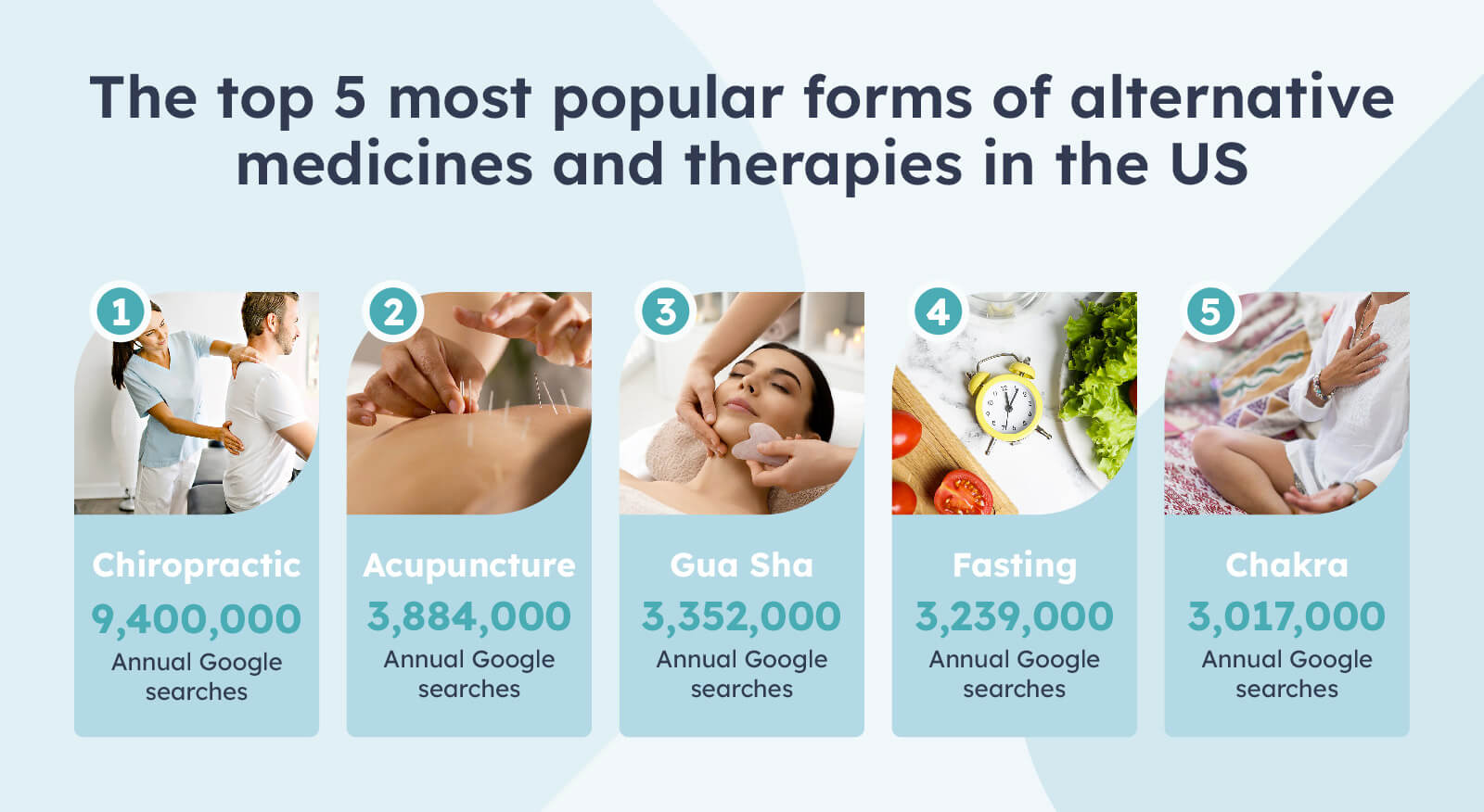 The most popular alternative medicine in the United States is chiropractic, with 9.4 million annual Google searches. Chiropractic medicine had its origin in North America, in 1895 a Canadian named Daniel David Palmer performed the first chiropractic adjustment, and then went on to found The Palmer School of Chiropractic, located in Iowa, in 1897. A natural form of hands-on care, there is no reason the FDA would approve it, yet it is used all across the USA.

With less than half the amount of searches that chiropractic managed, we have acupuncture. This practice is an ancient form of Chinese medicine, in fact, it dates to before 2500 BC, and is used to cure disease, ease pain and improve general health. Despite it involving many needles being inserted into your skin, it’s used all over the world.

With 3.3 million annual Google searches, we have the gua sha, another form of ancient Chinese medicine and more recently a skincare trend. However, its origins date back to the Paleolithic Age and it was scientifically logged as a treatment in medical records dating back to the Ming Dynasty in China. It was used on coma patients to massage their bodies to alleviate their symptoms and to massage against people’s skin to help with the pain.

Next up is fasting, which most of you probably have identified as nothing other than a dieting trend or have associated with Ramadan. However, it has been used as a therapeutic treatment as far back as Ancient Greece, when a physician named Hippocrates advised patients to not eat or drink when showing certain symptoms, as that would only feed the illness.

And finally, there are chakras, of which the body has seven, and no, this isn’t just a thing from Avatar: The Last Airbender. The concept of chakras arose in early Hindu texts, citing that the body had seven, whereas Buddhist texts contradict this by citing the body has five. It is generally thought that keeping your chakra aligned with meditative practices encourages improved health. The Western take on this, from a variety of people, is that the chakras are all associated with a nerve plexus.

The US states using alternative medicines and therapies the most

Hawaii comes out on top as the state in which alternative medicine is most popular, with 1,925 searches per 10,000 people. The three most searched medical practices from our list of 100 were chiropractic, Thai massage therapy, and acupuncture.

According to the census data, California is the most populous state in the USA, so it’s no surprise it ranks second here, with 1,919 searches per 10,000 people. The top three most popular searches in California were chiropractic, acupuncture, and the gua sha – with Thai massage and fasting not too far behind.

Third, we have the Northwestern state of Washington, with 1,886 annual searches per 10,000 people. Just as with two prior states, the most searched practice was chiropractic, with acupuncture second, then a tie between gua sha, fasting, and chakra.

Oregon managed 1,869 annual Google searches per 10,000 people, for a variety of different alternative medicines. Once again, the most popularly searched was chiropractic, with gua sha, acupuncture, fasting, and chakra making up the other most searched alternative medicine for this US state.

And finally, we have Colorado, one of the Mountain States, with 1,863 annual Google searches per 10,000 people for various alternative medicines. It comes as no surprise to say again, that the most popularly searched alternative medicine for Colorado was chiropractic. With, again, acupuncture and gua sha taking the second and third spots.

We took a list of alternative medicines from Wikipedia, and then trimmed it down to the top 100 most popularly searched worldwide.

We then used Google Keyword Planner to get search volumes for the entirety of the USA, dating from May 2021 to April 2022 for the 100 alternative medicine to determine which one was the most popular.

Again, using Wikipedia, we took down a list of the US states and their populations, then using Keyword Planner we got search volumes for each state – again from May 2021 to April 2022. We then calculated the searches per 10,000 people, using the population numbers, which were 2019 estimates from the US census.

If you are unable to afford your medication, we may be able to assist. NiceRx provides access to FDA-approved brand-name medications, including Januvia, Motegrity, Aubagio, Breo Ellipta, and Trelegy Ellipta.