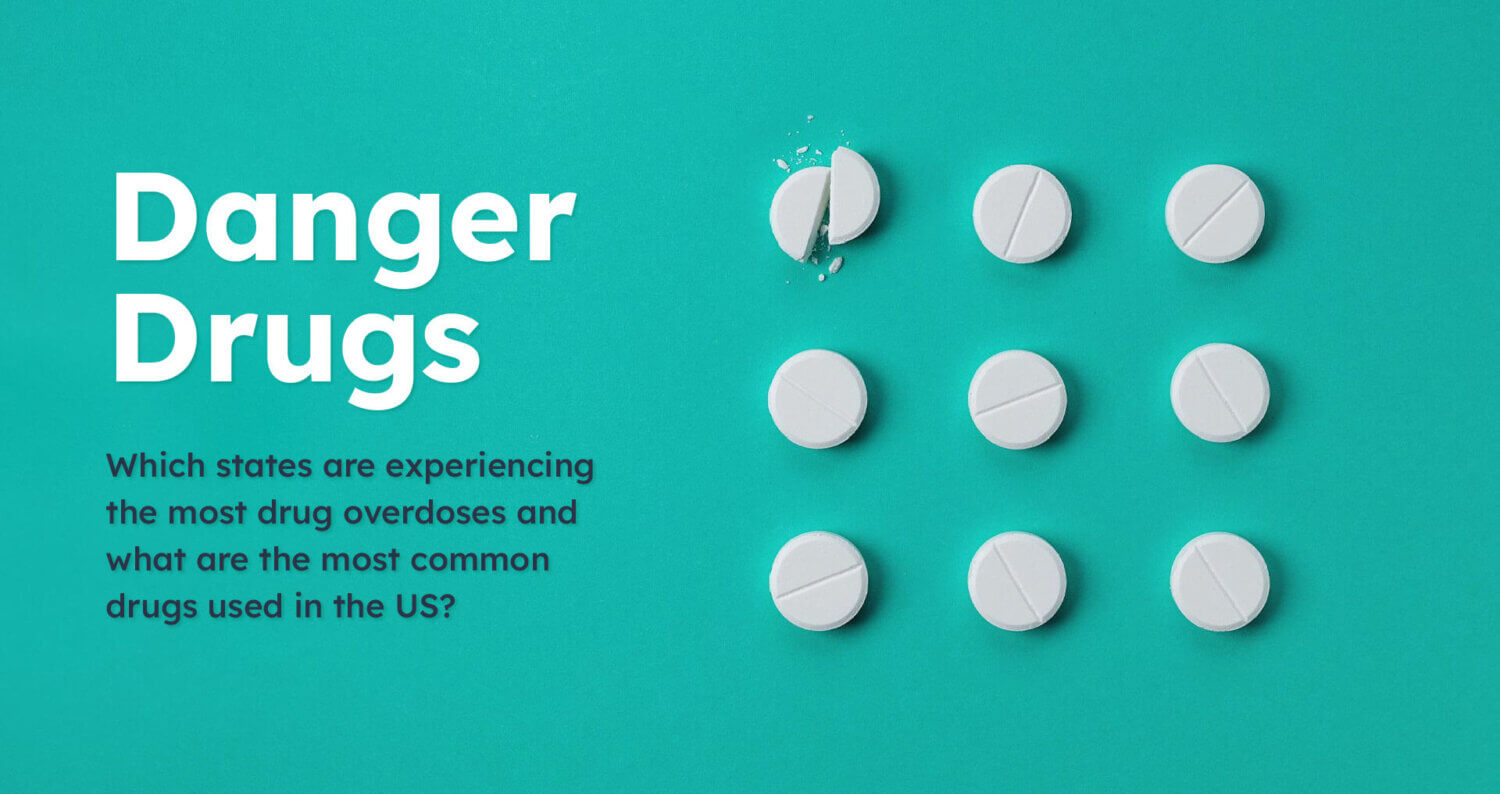 Which states are experiencing the most drug overdoses and what are the most common drugs used in the US?

It is important to monitor drug overdose deaths in the US to understand the impact on the population and to see how the crisis is evolving, for better or worse.

That is why we have collected data from the CDC’s National Center for Health Statistics, which receives data from death certificates, including the cause of death information from medical examiners and coroners.

At NiceRx, we are concerned with helping people to access medications affordably and easily, so check out our affordable medication here.

US States with the Highest Drug Overdose Deaths 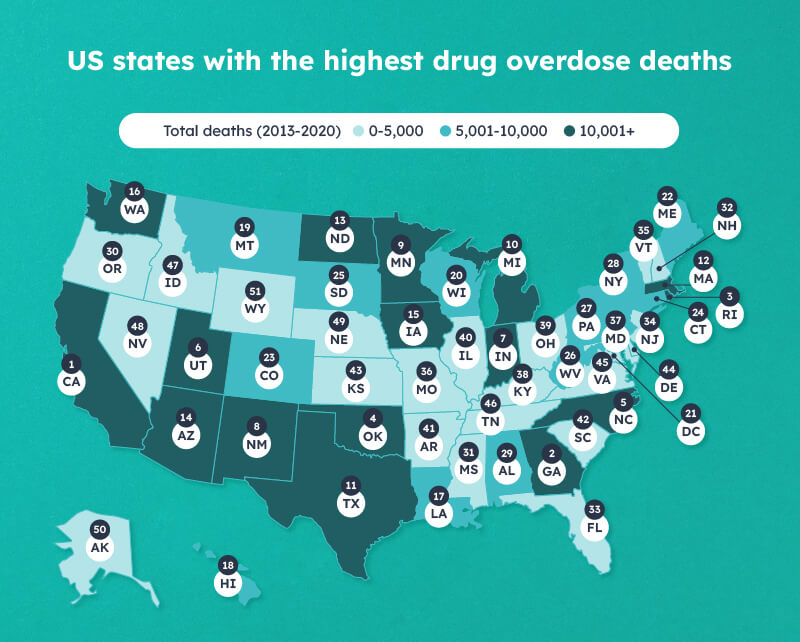 North Carolina falls in fifth place for the most overdose-related deaths in the eight-year period. The state has seen a 294% increase in deaths caused by drug overdoses since 2013, with 23,950 deaths recorded. It was found that heroin has played a huge part in the number of overdose deaths in North Carolina.

Drugs Causing the Most Deaths in the US 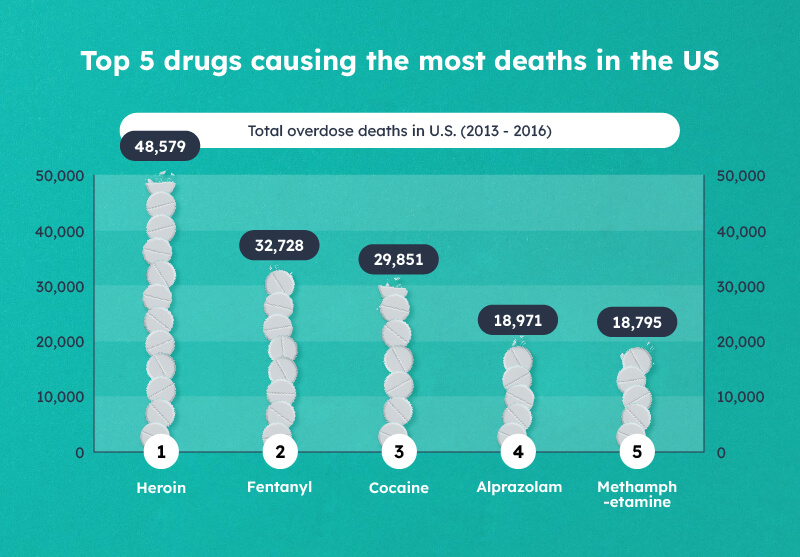 Heroin is the number one killer drug to cause overdose deaths in the US during the recorded eight-year period. The drug is a powerful opiate that’s usually sold as a white or brown powder.

The risk of overdose and death is high when using heroin, as it causes many users to become dependent on it, making it the most dangerous drug to become addicted to. With 48,579 deaths in the US alone, heroin has played a huge part in the opioid epidemic across the country.

Fentanyl is the second most dangerous drug in the US, with 32,728 Total Deaths. It is a synthetic opioid that is up to 50 times stronger than heroin and is a major contributor to fatal overdoses in the US.

It is a drug of abuse. Fentanyl (and other opioids) could possibly be used as an incapacitating agent to impair a person’s ability to function.

Cocaine is the third most dangerous drug, with 29,851 deaths caused by overdose between 2013 and 2016. Cocaine is a powerfully addictive stimulant drug made from the leaves of the coca plant native to South America.

While some people may see it as a recreational drug, it is possible to overdose on cocaine. An overdose occurs when a person uses enough of a drug to produce serious adverse effects, life-threatening symptoms, or death. According to NIDA, cocaine-related death totals have seen a significant fluctuation in the last decade or so.

Alprazolam, often referred to as Xanax, is the fourth most dangerous drug in the US. Alprazolam is a prescription medication used to treat anxiety and panic disorder. The National Center for Drug Abuse Statistics (NCDAS) estimates that more than 16 million Americans (6%) abuse prescriptions like Xanax every year. Some 4.8 million Americans use Benzodiazepines every year, with Xanax as one of the best-known brand names.

Methamphetamine is the fifth most dangerous drug in the US, with 18,795 deaths caused by overdoses between 2013 and 2016. Meth is a part of the amphetamine family of stimulant drugs, it comes in several different forms including tablets, powder, or crystals. 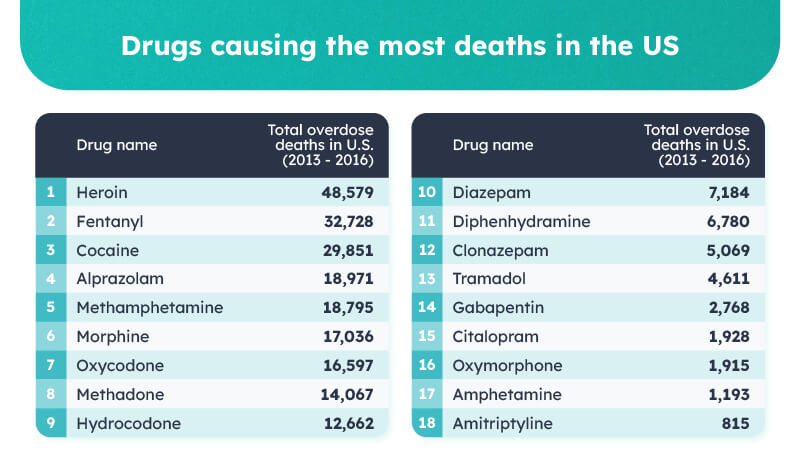 The Drugs with the Biggest Increase in Overdose Deaths

The data table below shows the total number of deaths caused by each stimulant in the three-year period, as well as their percent increase from 2013 to 2016. 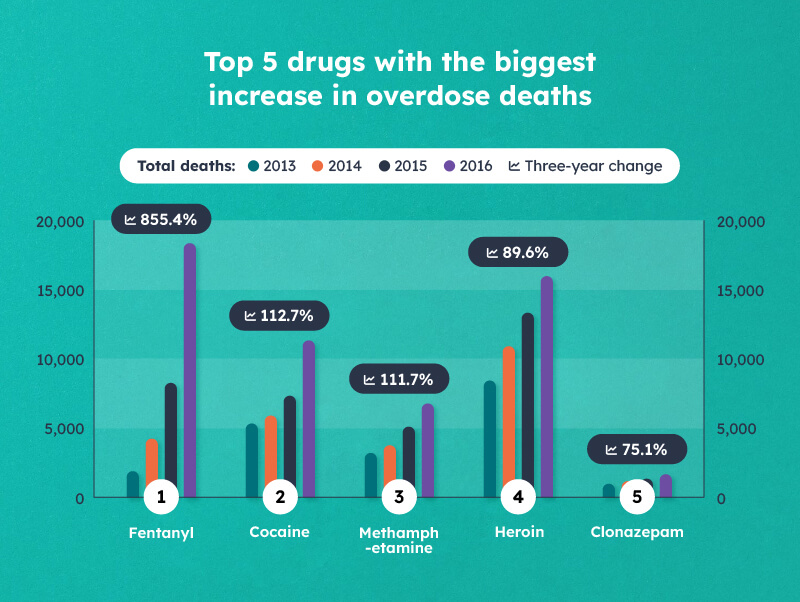 Within the three-year period, fentanyl saw the biggest increase in drug overdose deaths in the US (855.5%). As the second most dangerous drug behind heroin for its number of deaths, the alarming increase caused by synthetic opioid is equally concerning. In 2013, the death toll for fentanyl was at 1,919, fast forward to 2016, and this number increased to 18,335.

Cocaine saw the second highest increase in drug overdose deaths between 2013-2016 (112.8%). As the third most dangerous drug, causing 29,851 deaths by overdose between 2013 and 2016, the use of cocaine is on the rise, and it is unfortunately likely to take many more lives. 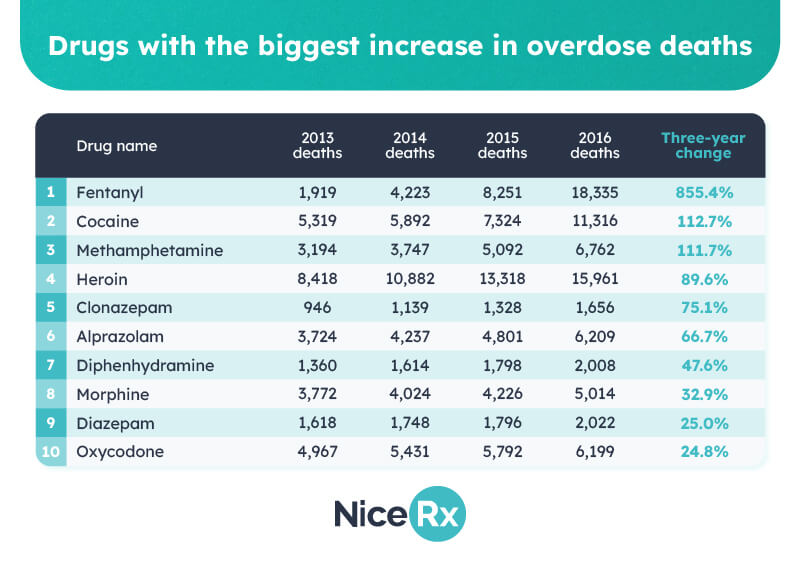 We started by using CDC resources to find drug overdose death rates. We were able to gather the number of 2020 deaths for each state. We then took all data from 2013 to 2020 to get a total number of deaths for the eight years and were able to calculate the increase from 2013-2020.

To gather the most dangerous drug’s data, we used another CDC resource, Drugs Most Frequently Involved in Drug Overdose Deaths: United States, 2011–2016  to find the top 15 drugs involved in drug overdose deaths in the United States from 2011–2016.