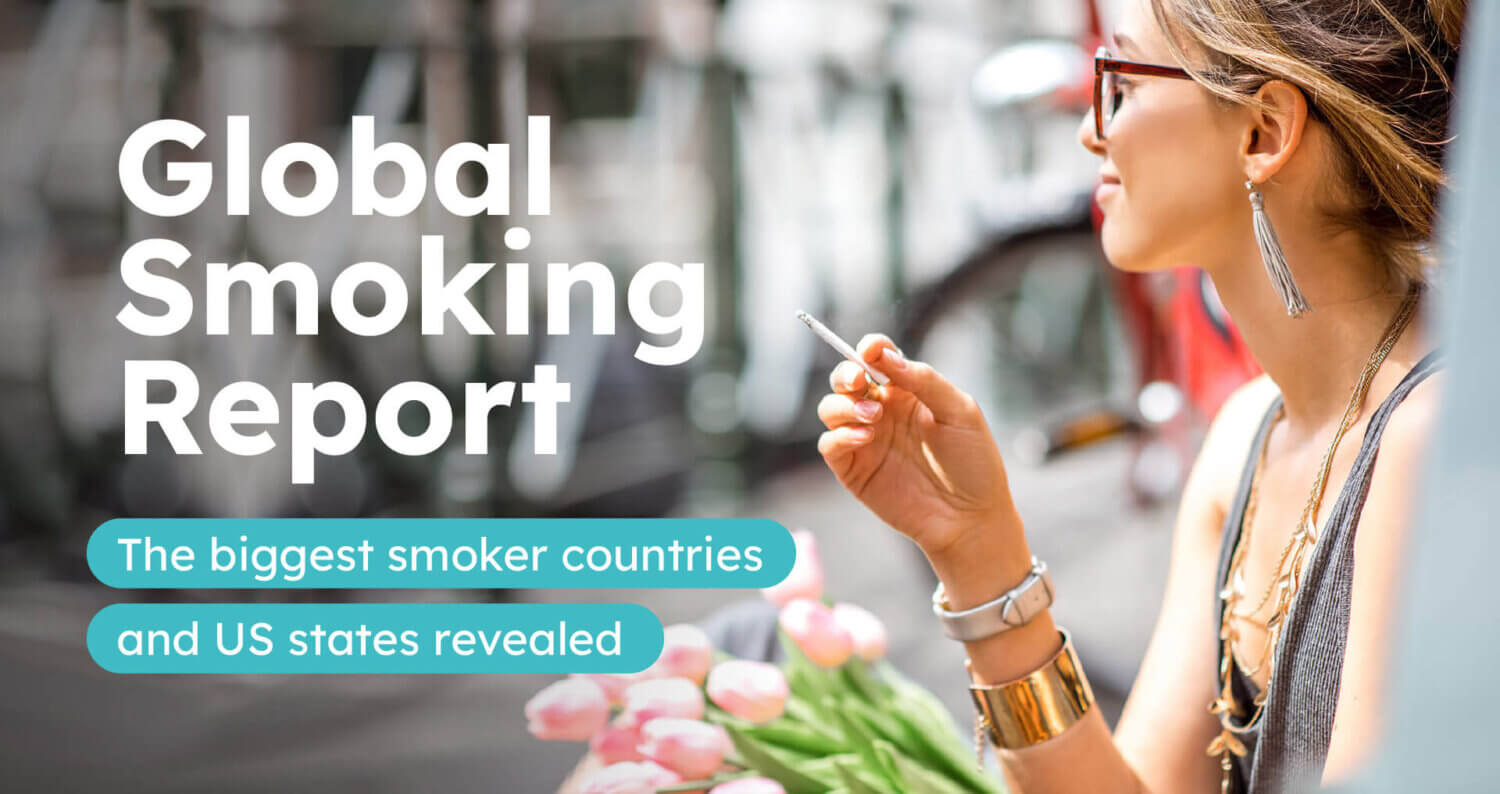 The biggest smoker countries and US states revealed

A huge portion of the world’s population are smokers, in fact, according to the World Health Organization, 22.3% of the global population used tobacco. The primary reason people smoke is to reduce stress, at the risk of addiction. This is because tobacco contains a chemical called nicotine, which creates a sense of relaxation when consumed.

Tobacco is one of the biggest causes of preventable deaths in the world, killing more than 8 million people worldwide, annually. It also increases the risk of a variety of health issues, such as an increased risk of a stroke, risk of multiple forms of cancer, as well as heart problems, such as heart disease.

The latter of which can be easily treatable with Entresto, a heart disease medication that we provide coupons for to help with the cost!

US states with the highest smoking rates 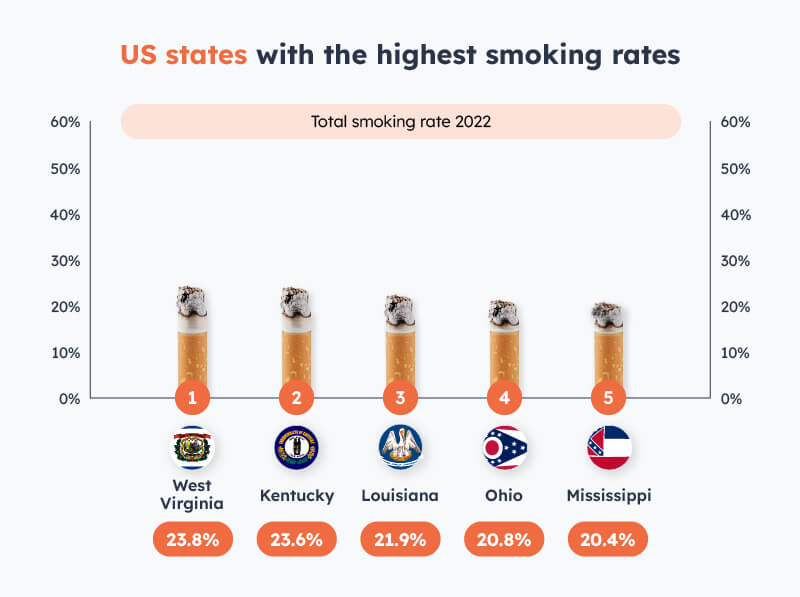 West Virginia in the Southeastern region of the US is one of the smallest states, with a population of a little over 1.79 million, making it the twelfth least populous state. Despite that, it has the highest smoking rate in the states, at 23.8%.

Bordering West Virginia, is Kentucky which is also in the Southeast of the US, with a population of over 4.5 million people, as of 2020. It also has a smoking rate that rivals West Virginia, being just 0.2% lower.

Louisiana is located in the deep South of the United States and is the 25th most populous state with 4.65 million people, despite being the 20th smallest state by area. As of 2022, the smoking rate for Louisiana is at 21.9%, making it the third highest in the whole United States.

In the Midwestern region of the United States lies the state of Ohio, the seventh most populous state with a little under 11.8 million people. Ohio’s smoking rate stands at 20.8% of the population for 2022, which is over 2.4 million smokers.

And with the fifth highest smoking rate, we have Mississippi, another state located in the Southeastern region of the United States. It has a population of around 2.96 million people and is also the lowest-income state per capita. It also has a smoking rate of 20.4%, almost three times higher than Hawaii, the state with the lowest smoking rate. 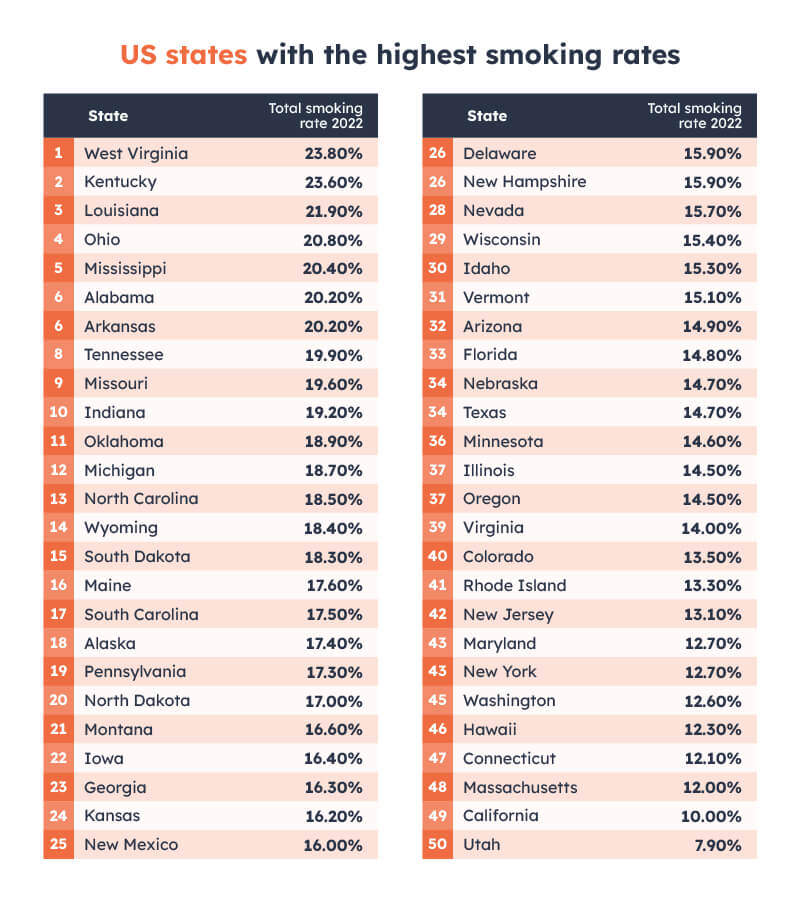 US states with the highest smoking-related deaths 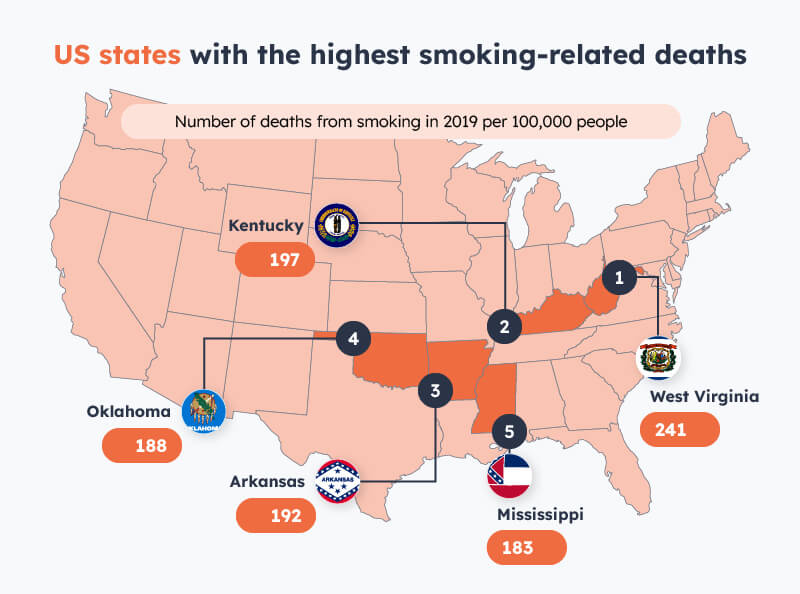 Having the highest smoking rate in the United States, it should come as no surprise that West Virginia ranks highest for most smoking-related deaths. Annually, this southeastern state records 241 deaths caused by smoking, per 100,000 people.

Again, Kentucky follows as a somewhat close second, despite having more than double West Virginia’s population. High rates of smokers more often than not will lead to a higher rate of health issues, caused by tobacco use. This has even led to 197 deaths annual for the state, per 100,000 of the population.

A third state located in the south of the United States, Arkansas has a joint-sixth highest smoking rate in the whole of the US in 2022. Annually, the state has 192 deaths per 100,000 caused by smoking, just a few less than in Kentucky.

Oklahoma is also from the deep south of the United States and in fact, it shares its Eastern border with Arkansas. The state had a smoking rate of 18.9% in 2022, which puts it just outside the top ten. Despite this, the state still annually sees 188 smoking-related deaths per 100,000. However, it has been gradually tightening smoking laws, especially in relation to younger people.

To round out the top five, we have a fifth state that is located in the south of the United States, Mississippi. According to Tobacco Free Kids, the use of tobacco cost the state around $818 in government expenditures, per household. The use of tobacco also sees the state annually record 183 deaths per 100,000. 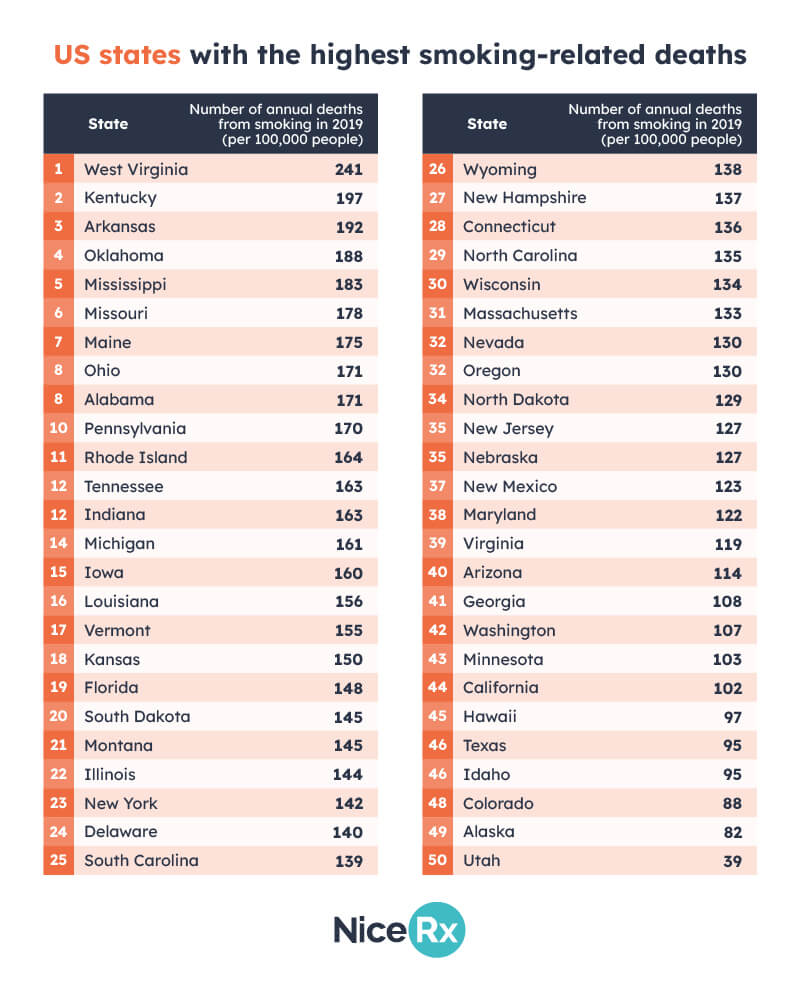 Countries with the highest smoking rates 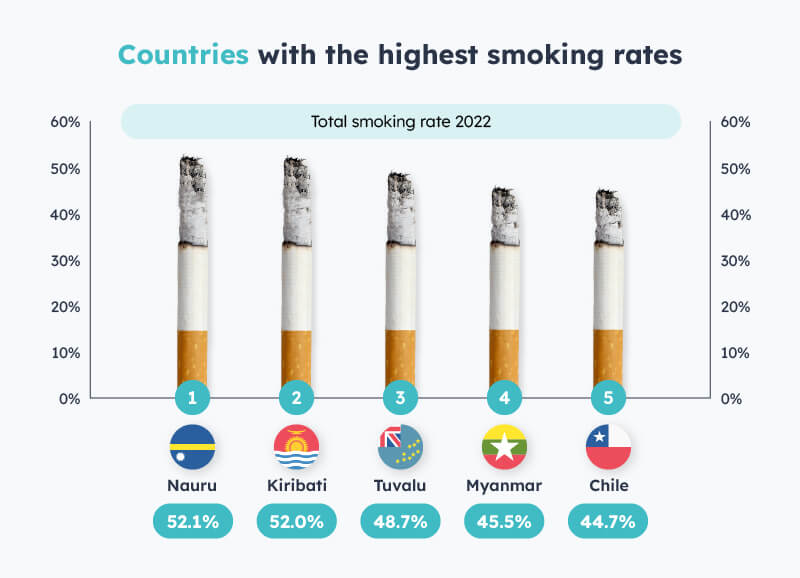 The Republic of Nauru is an island country in Oceania, and is the smallest republic in the world, with a population of around 10,000. Nauru has high rates of type 2 diabetes, heart and kidney disease, as well as a high rate of smokers. The latter can only serve to worsen the country’s current health issues.

Another republic, located in Oceania, we have Kiribati, an archipelago country that has a population of over 119,000 as of 2020. The smoking rate, as of 2022, is more than half of the adult population which is astonishing.

Tuvalu is an island country, located in Oceania, specifically in the Polynesian subregion. In fact, its islands are located between Hawaii and Australia. As of the 2017 census, Tuvalu has a population of 10,507 and a smoking rate of 48.7%. The highest cause of death in the country is heart disease, followed by high blood pressure and with such high smoking rates, that can only make matters worse.

The Republic of the Union of Myanmar is a country in Southeast Asia and is the largest country in this region of Asia with a population of 54 million people as of 2017. With a smoking rate of 45.5%, that is a huge number of smokers in the country.

Next, we have the world’s most populous city, with more than 1.4 billion people, China, located in Eastern Asia. With that said, China’s smoking rate is at 44.7% as of 2022, considering the population, that’s an astronomical number of people. 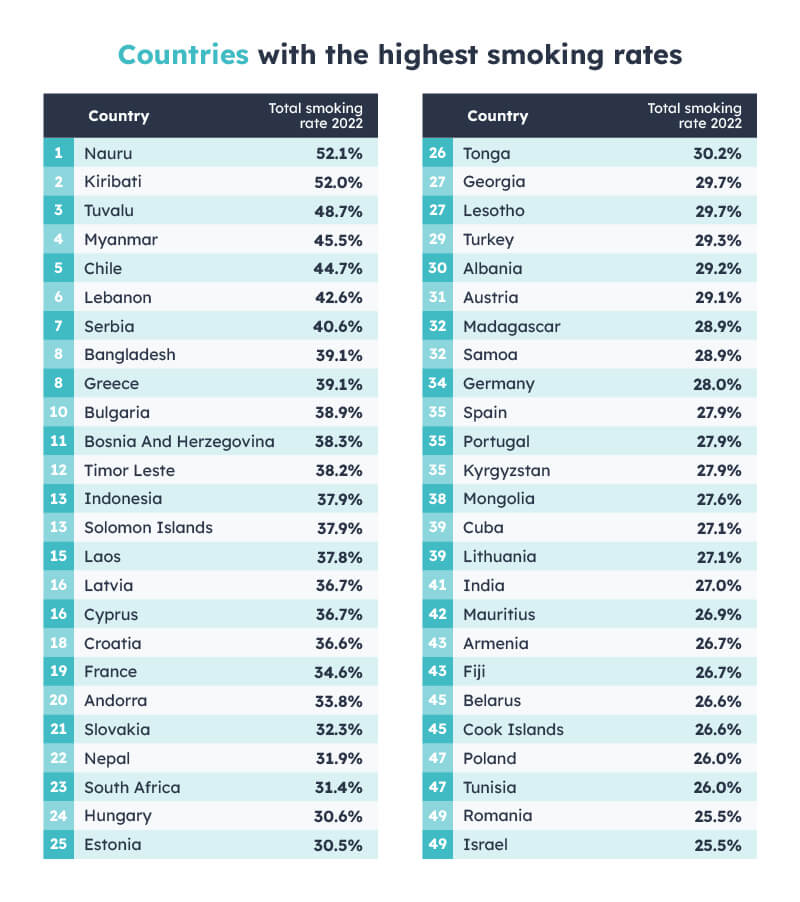 Countries with the highest smoking-related deaths 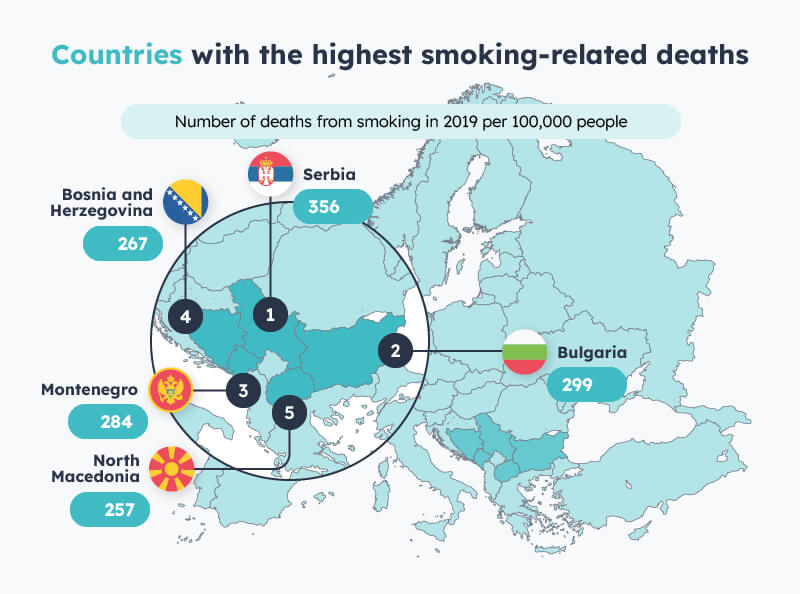 Serbia is situated in the Balkans, which is located in the Southeastern region of Europe, the country has a population of over 6.8 million people. It ranks within the top ten countries with the highest smoking rates, which serves as an explanation for its high smoking death rate. In 2019, Serbia had 356 deaths per 100,000 caused by smoking, higher than any other country.

A second country located in the Balkans region of Europe, Bulgaria sits along the coast of the Black Sea. It is the sixteenth largest country in Europe by area and has a population of just under 6.9 million as of 2021. Bulgaria ranks exactly tenth among countries with the highest smoking rate and in 2019, it recorded 299 deaths per 100,000 due to smoking.

Montenegro is another European country located in the Balkans and shares its northeastern border with Serbia. It also shares maritime territory with Italy and is on the coast of the Adriatic Sea. Montenegro has a population of 620,170, making it the smallest Balkan country and it recorded 284 deaths caused by smoking per 100,000 people in 2019.

Bosnia and Herzegovina, informally known as Bosnia, is a country situated at the crossroad between South and Southeast Europe, located in the Balkans. It has a slim coastline along the Adriatic Sea and shares borders with both Serbia and Montenegro. Bosnia fell just outside of the top ten countries for the highest global smoking rates, which surely contributed to its 267 deaths per 100,000 people, caused by smoking.

Taking the fifth spot and ensuring the top five are all Balkan countries, is North Macedonia. This country shares borders with Serbia to the north and Bulgaria to the east, it is also completely landlocked. North Macedonia did not feature in the smoking rates ranking, however, surveys within the country show that the rate is very high along with second-hand smoke exposure. In 2019, the country recorded 257 deaths caused by smoking per 100,000 of the population. 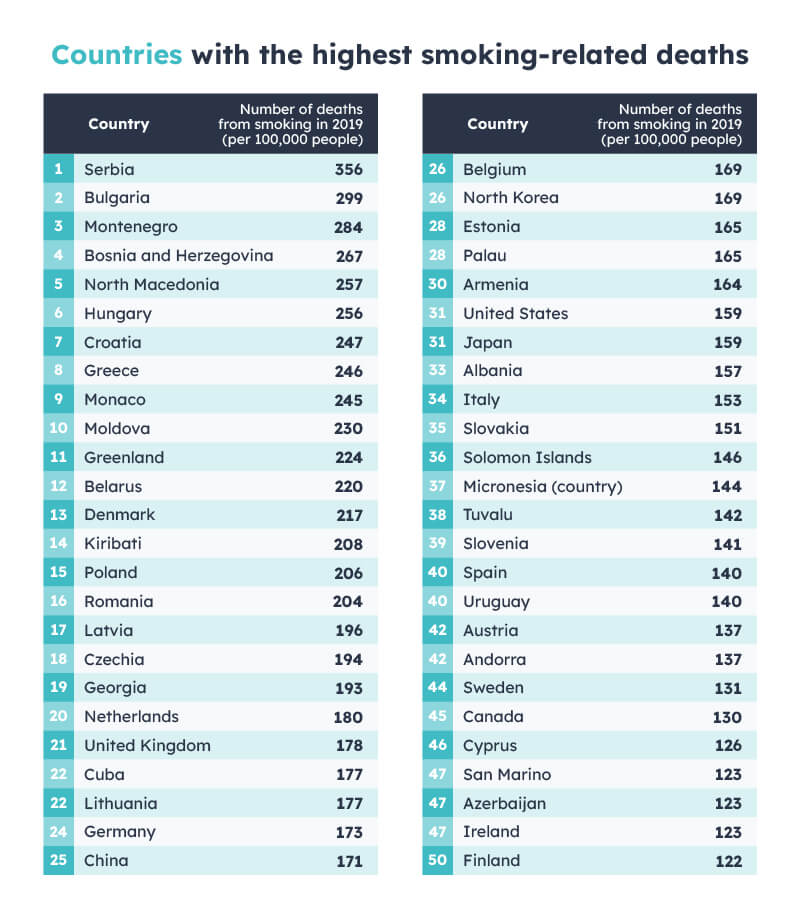