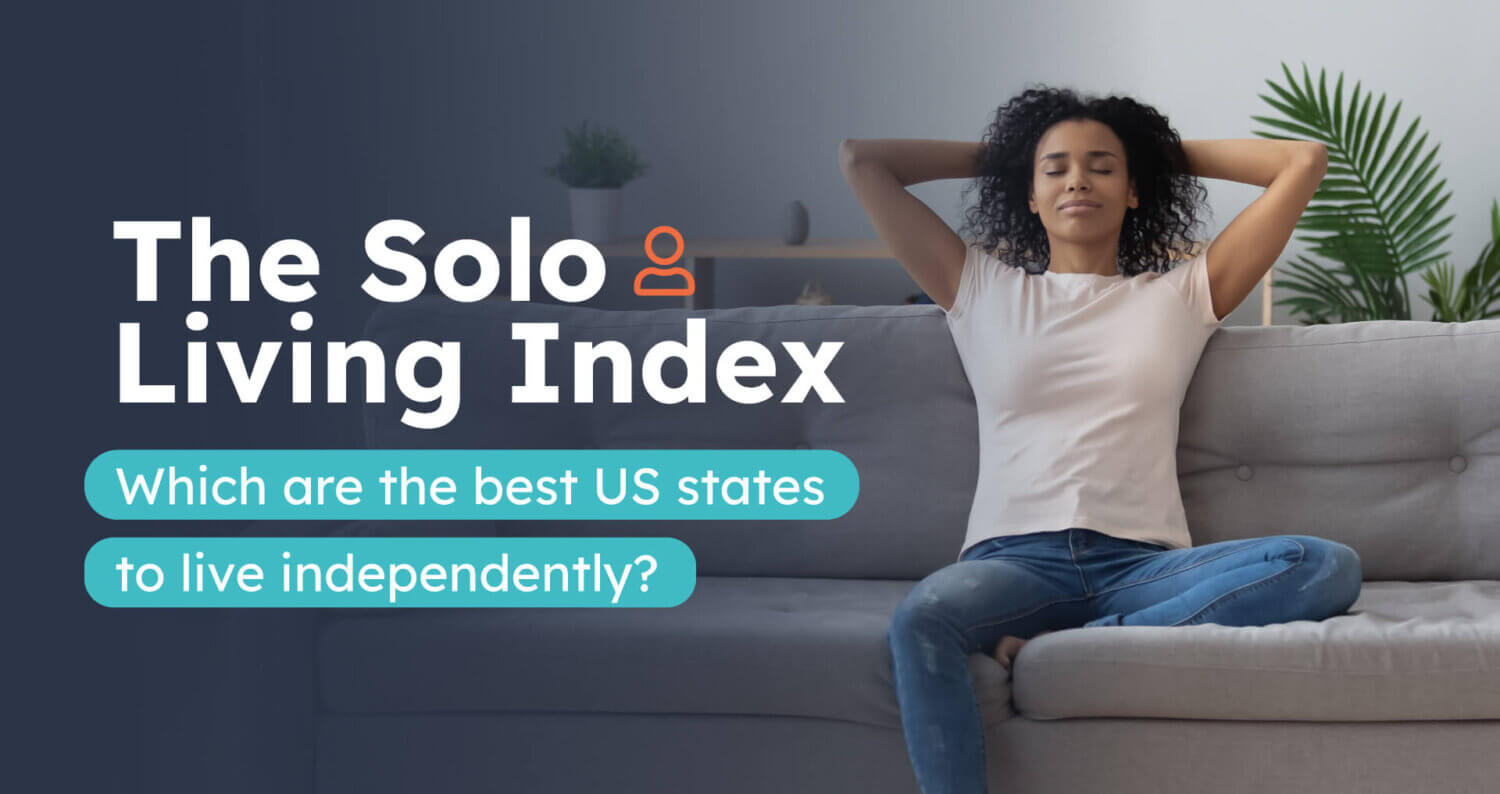 Which are the best US states to live independently?

For many people living alone is a liberating experience, leaving them free to live life on their own terms and foster greater independence from others. It can also be an unfortunate necessity as we grow older. However, The rising cost of living can also make it difficult for some living on a single income to afford essentials like prescription medications, rent, food, and utility bills.

But which is the best US state to be a young single person, and which state is best for elderly singles? NiceRx has delved into the data, looking at cost of living and healthcare factors to reveal the best locations for the single life, both young and old. 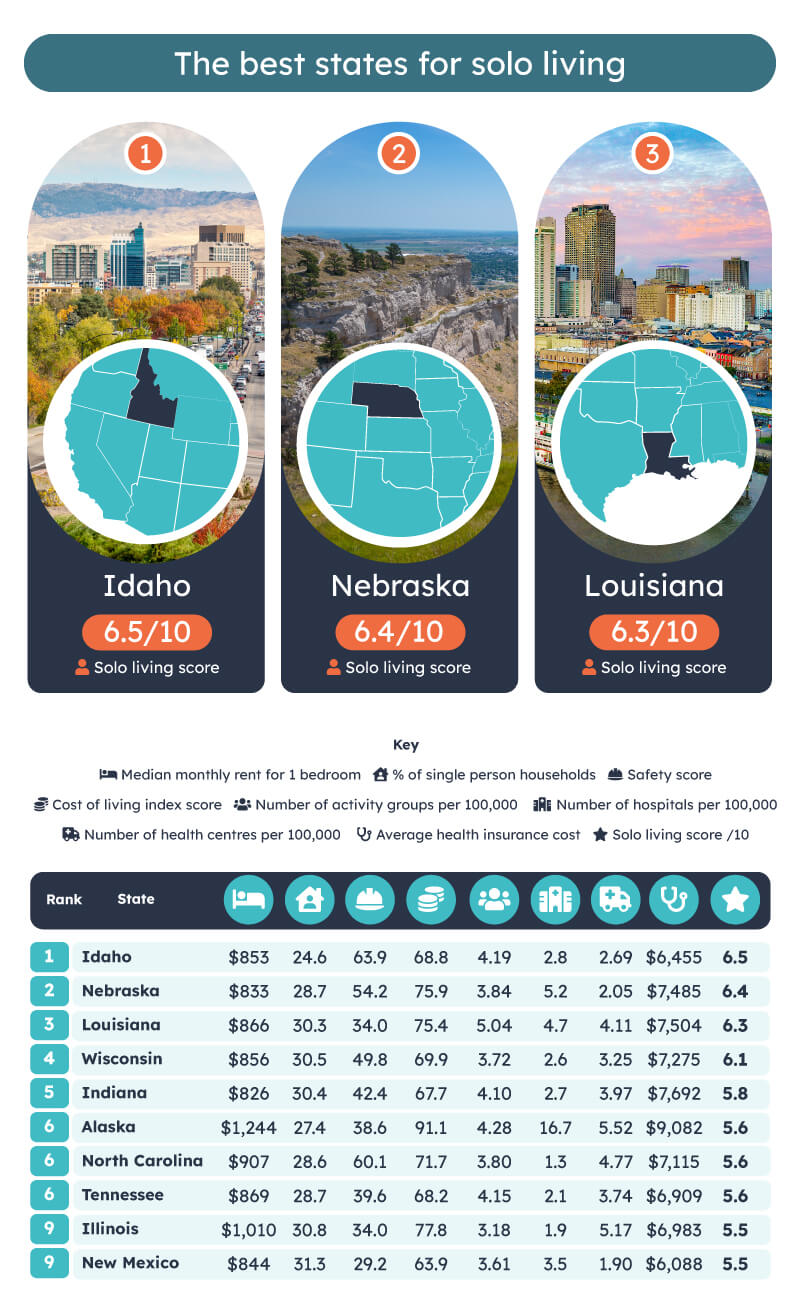 Taking the top spot on our list with a score of 6.5 is Idaho. Nicknamed the gem state because of its breathtaking landscapes, Idaho is perfect for solitary nature lovers. With wide-open spaces and friendly neighbors, it scored as one of the safest places in our index. The state also has a high number of group activities per 100,000 people.

One of the most affordable states for rent in our index, making it perfect to live comfortably on a single income, Nebraska ranks second with an overall score of 6.4. The state also ranks highly for the number of hospitals per 100,000 and is among the safest locations in our index too. Most of Nebraska’s population live rurally, so it’s an ideal state for those who wish to move to a place with a slower and more peaceful lifestyle.

Taking third place in our index is Louisiana with a score of 6.3. The state benefits from a relatively low cost of living and ranks in the top 10 lowest rent prices. As well as having a relatively high number of single-person households, Louisiana has one of the highest numbers of group activities per 100,00 people, solidifying its reputation as the festival capital of America and as an ideal place for those living on their own to meet new people.

Affordability of housing is a chief concern, with rent prices differing drastically across states. The cheapest US state in terms of rent is Kentucky, with a median rent price of $763 per month for a 1 bedroom apartment in the bluegrass state.

One of the most important things to consider when moving to a new state is determining the amount of money you need to spend on food energy bills and taxes. In our index, New Mexico had the lowest cost of living index, with its residents giving it a cumulative score of 63.9 out of 100. This could be due to the fact it has some of the lowest state and local taxes in the country.

The crime rate is another important factor when thinking about moving to a new area, especially if you’re living alone. When looking into the safety of each state, Utah ranks as the most secure with an index score of 67.2 out of 100, according to submissions from its residents.

One key aspect of deciding which state to relocate to is finding like-minded people. In this case, people who also live independently. We found that New Mexico has the highest percentage of single-person households, with 31.3% living alone.

Moving to a new state on your own can be a lonely experience for some and many people choose to join in with group activities, such as community volunteering projects and exercise classes, in order to make friends. With this in mind, we found Colorado has the highest number of group activities per 100,000 at 5.80.

Access to healthcare is vital to consider when thinking about moving to a new state. Alaska had the highest, with 16.7 per 100,000 people, perhaps due to its low population.

As well as hospitals, health centers play a key role in deciding where to relocate, in order to keep you healthy and happy in your new home state. Florida has the most health centers with 6.47 per million people.

The cost of health insurance is essential to consider when thinking about which state to relocate to, as it’s important to give yourself financial protection in case of an accident or a serious illness. New Mexico has the cheapest average health insurance with a cost of $6,088 per year. 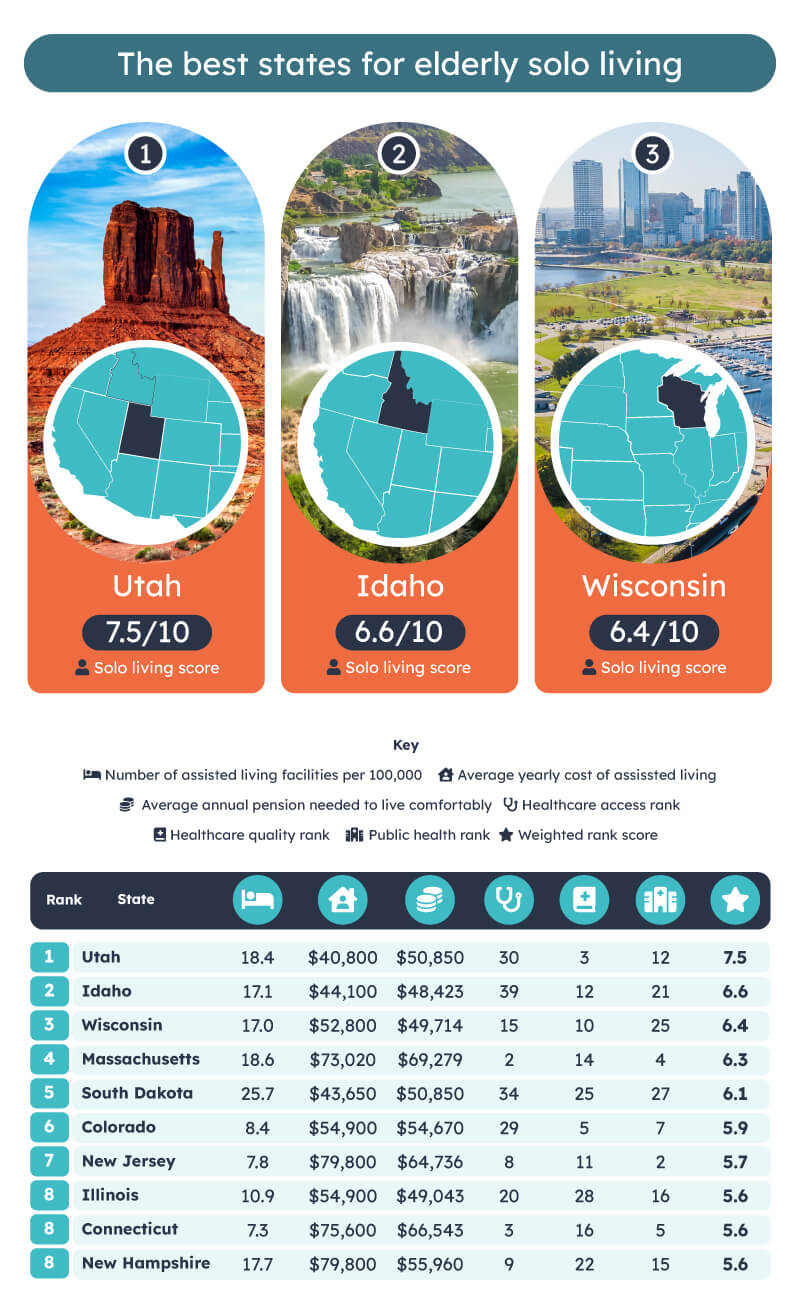 Coming first in our rankings is Utah with a score of 7.5. The state has a very low cost of assisted living coupled with a high number of assisted living facilities as well as scoring highly for healthcare quality. Utah’s thriving economy and ample opportunities for retirees to keep active make it an attractive location for older generations.

With a score of 6.6, Idaho comes second in our index. Like Utah, Idaho has a high number of assisted living facilities per 100,000 people, twinned with a relatively low cost of assisted living. The state also ranks highly for healthcare quality. Known for its scenic beauty, Idaho is the perfect place for retirees who love to commune with nature.

This state scored 6.4, taking it to third place in our index. Wisconsin scores relatively highly for both healthcare quality and accessibility. It also has a high number of assisted living facilities per 100,000 people. Famous for its cheese production and the Green Bay Packers, Wisconsin holds much more for retirees, with a strong sense of community and a passion for festivals as well as more than 500 golf courses, Wisconsin is an attractive destination for solo retirees. 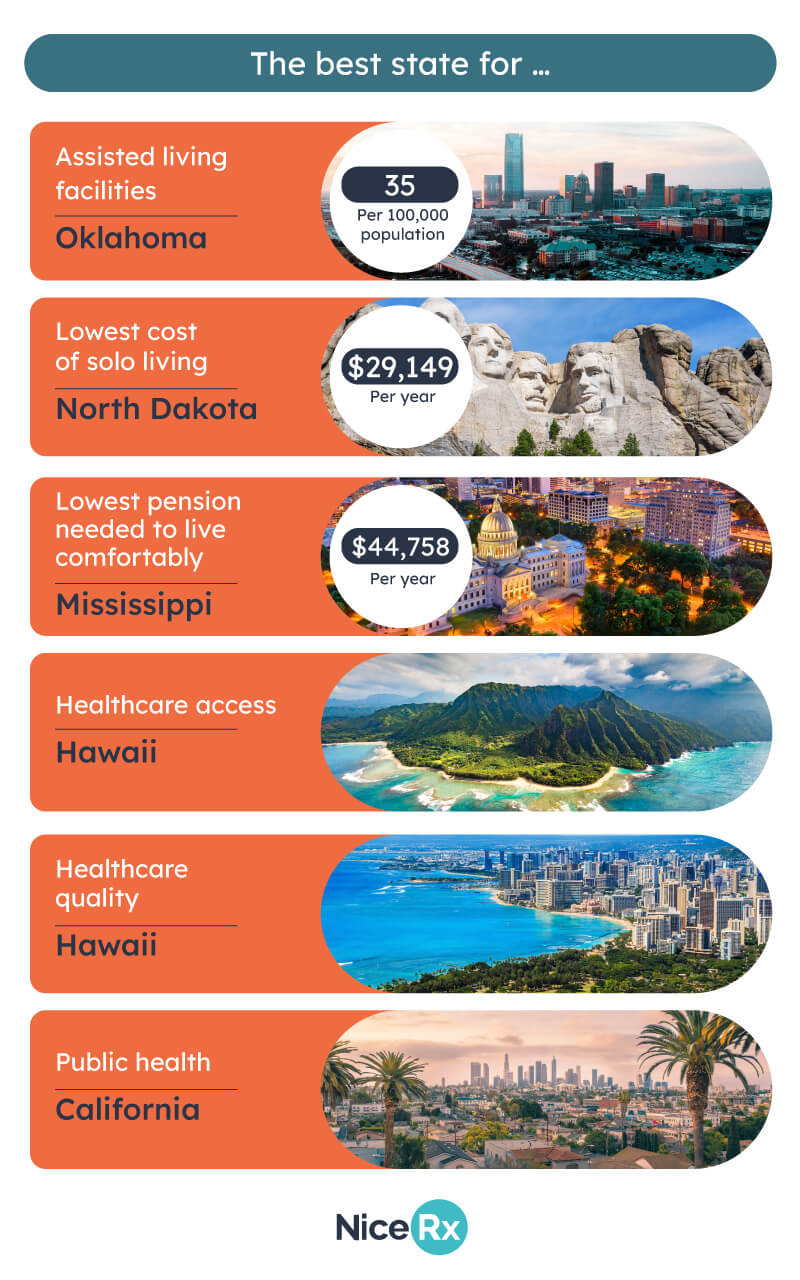 An important factor to consider when choosing a state to move to as a single elderly person is perhaps choosing an assisted living facility, as they provide numerous benefits such as safety and the ability to socialize. With this in mind, Oklahoma takes the top spot for assisted living facilities, with 10 more per 100,000 than its closest competitor at 35 per 100,000.

Also, a key factor is the cost of assisted living facilities, as this can vary greatly by state as well as the fact that people are increasingly living longer. This may put a strain on many retirees’ pensions, especially if they’re only relying on a single pension. North Dakota ranks first in our index, with the lowest average cost of $29,149 per year.

Managing your finances can be difficult when you’re on a single fixed income, making it important to think about how far your pension will go in terms of the cost of living. Mississippi has the lowest average annual pension required to live comfortably at just $44,758 leaving many free to enjoy their retirement without money worries.

Access to healthcare can become a top priority for many elderly people wishing to relocate on their own. With this considered, the best state for healthcare access is Hawaii, coming top of our list.

As well as having plenty of access to healthcare, it’s important that elderly people get the highest quality healthcare too. As with healthcare access, Hawaii also comes first in healthcare quality.

Keeping healthy is vital in old age, with public health programs helping to prevent the biggest threats to the health and wellbeing of the population. California tops the ranking for public health, making it one of the most health-conscious states.

We looked at each US state, ranking each on the following factors, giving them a normalized score out of 10 for each factor before taking a final average score across all ten. Note that some states had to be omitted due to a lack of data.

Median monthly rent for 1 bedroom
The average cost of a 1 bedroom apartment in each state in 2022 according to world population review.

Safety score
The average safety index scores of cities – grouped by state – according to Numbeo.

Cost of living
The average cost of living index scores of cities – grouped by state – according to Numbeo.

Activity groups
The number of events listed on eventbrite in each state for the month of March, per 100,000 people.

Hospitals
The number of hospitals in each state according to the Health Resources and Services Administration, per 100,000 people.

Population Figures
The population totals by state according to world population review.

Average annual pension needed to live comfortably
The average yearly expenses of retirees to afford a reasonable standard of living by state, according to world population review.

Healthcare access rank
A state’s ranking based on adult and child wellness visits is taken from USA News 2021 Healthcare rankings.