The most philanthropic places in the US and worldwide

The effects of the pandemic turned the world’s attention towards giving back and helping others. More Americans joined volunteering programs than ever before, and donations to health charities soared.

In the climate of giving, which are the most generous countries, states, and celebrities?

To find out, NiceRx analyzed each US state and OECD country to find the most charitable states and nations. We also investigated the American health charities receiving the most donations and the world’s most philanthropic celebrities.

The most charitable states in the US 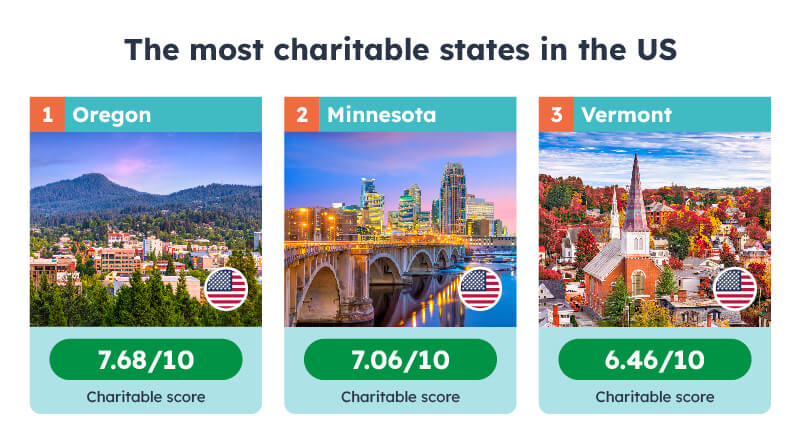 Oregon is the most charitable state in the US overall and has a giving score of 66, which is based on public volunteering and charitable donations.

The residents of Oregon also made more Google searches for charities, volunteering, and donating than any other state! There were 46,000 searches in the last twelve months for every 100,000 people living in the state.

There are also 168 public charities operating in the state of Oregon for every 100,000 people.

Minnesota comes in second place for charity and giving, scoring 7.06/10 overall. Minnesota’s giving score is 68, based on volunteering and donations – the highest giving score out of the top three states!

People in Minnesota made 34,000 Google searches per 100,000, in the past twelve months for charity-related search terms.

In Minnesota, there are 167 charities per 100,000 people, ranging in causes from health charities to environmental organizations.

Vermont ranks as one of America’s most charitable states with an overall score of 6.46. With a giving score of 55, Vermont ranks lower than most states in this category.

There were around 20,000 Google searches made for every 100,000 people in Vermont for charity-related searches.

Vermont has the most charities out of all US states. There are 306 active charities for every 100,000 people in the New England state. 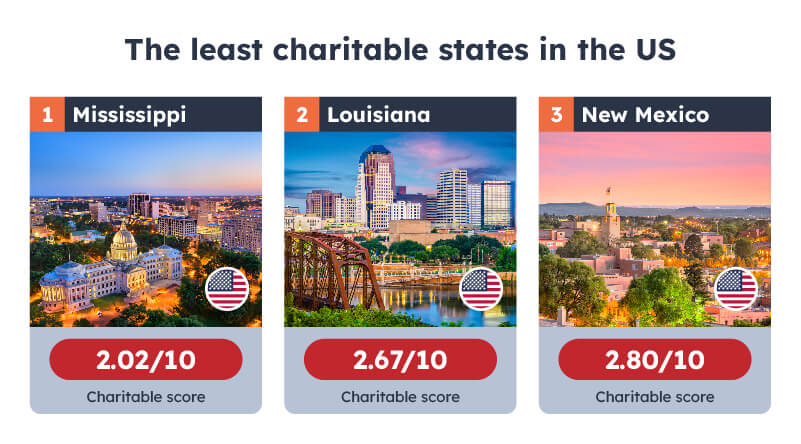 Mississippi is America’s least charitable state, with an overall score of 2.02 out of 10. WalletHub gave Mississippi a giving score of 46. The only states with a lower score are New Mexico and Arizona.

Residents of Mississippi made 10,000 charity-related Google searches in the last twelve months for every 100,000 of the state’s population.

There are 87 active charities working in Mississippi for every 100,000 people.

Louisiana ranks as one of the nation’s least charitable states, scoring 2.67 out of 10. Louisiana’s giving score is 48, accounting for public volunteering, charities, and donations.

There were 13,000 Google searches for every 100,000 people in Louisiana over the last twelve months.

New Mexico has the lowest giving score out of all US states according to research from WalletHub, which gave the state a score of 44.

There were 16,000 Google searches made in the past twelve months for charities and volunteering, for every 100,000 residents of New Mexico.

The state has 132 active operating charities for every 100,000 people.

The most charitable nations in the world

New Zealand is officially the world’s most charitable country, scoring 7.18 out of 10.

New Zealand’s giving index score is 47 – higher than most countries on the list. The giving score is based on helping strangers, volunteering time, and monetary donations.

In New Zealand, there were 54,000 charity-related Google searches for every 100,000 people in the last twelve months.

The UK ranks in second place as one of the world’s most charitable nations.

Charities Aid Foundation determined the UK to have a giving score of 41, according to volunteer time, helpful acts, and monetary donations.

Canada is one of the most giving countries in the world, scoring 6.17 out of 10 overall.

Canada’s giving index score from Charities Aid Foundation is 38, higher than most countries on the list.

Canadian residents made 53,000 Google searches for charities and volunteering for every 100,000 people in the last twelve months.

The least charitable nations in the world 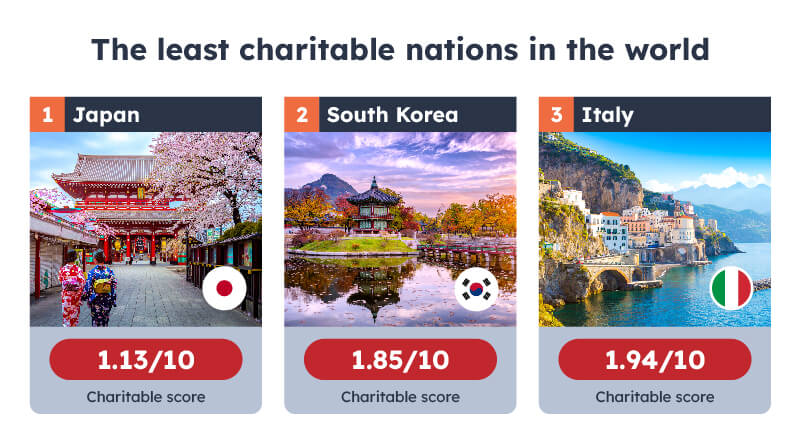 Japan has the lowest giving index score, at just twelve. Although, Charities Aid Foundation highlights this could be due to complex rules around charity donations in Japan, and high expectations of state provision.

There were 3,000 charity-related Google searches for every 100,000 people made from Japan in the last year.

There are 0.08 4-star US-based charities that work internationally in Japan for every 100,000 of the population.

South Korea scores 1.85 out of 10 overall as one of the least charitable nations. South Korea’s giving index score is 22 – equal to Italy.

There were fewer Google searches for charities and volunteering in South Korea than in most other countries.

A total of around 1,000 searches for every 100,000 people were made in the last year and the only countries with fewer searches are Colombia and Turkey,

There are 0.08 4-star US-based charities working in South Korea for every 100,000 people in the country.

Italy is one of the lowest-scoring countries and least charitable countries in the world. Italy’s giving index score from Charities Aid Foundation is 22 – lower than most countries on the list.

For every 100,000 of Italy’s population, there were 3,000 charity-related Google searches in the last year

There are 0.07 4-star US-based charities that work internationally in Italy for every 100,000 people.

The most charitable celebrities 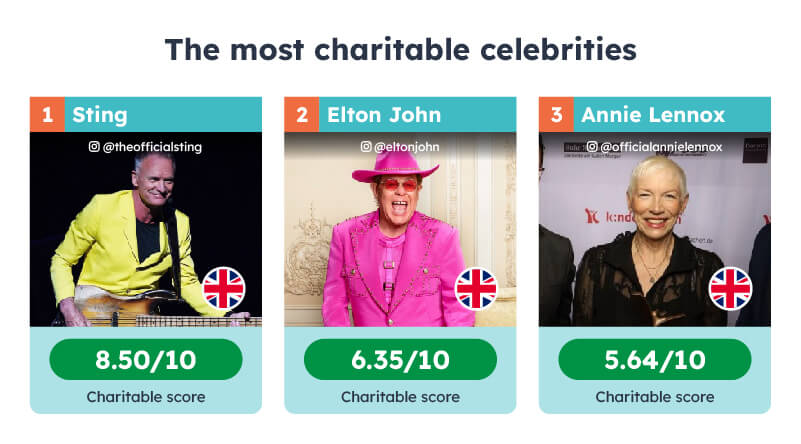 Investigating the donations and volunteering time of the public gives insight into which are the most generous states and countries. However, the income of ordinary people is sometimes just a fraction of the earnings of some celebrities.

Sting, the British musician and former member of the Police, tops our list as the most philanthropic public figure in the world.

There are 246 total news articles online about Sting’s charity efforts.

Often commended for donating hundreds of millions of dollars to charity organizations, Elton John ranks as one of the most charitable celebrities in the world.

The British musician has supported 64 charities and foundations and founded the Elton John AIDS Foundation.

Elton John has supported 33 charitable causes, including homelessness and cancer.

There are 445 articles online regarding Elton John’s charitable efforts – more than any other celebrity!

British singer and member of Eurythmics, Annie Lennox is one of the world’s most giving celebrities.

Lennox has supported 86 charities in total, across 32 charitable causes. Lennox has given to organizations supporting environmental conservation, poverty, and human trafficking.

There are a total of 305 online news articles about Annie Lennox’s charity efforts.

The health charities getting the most donations 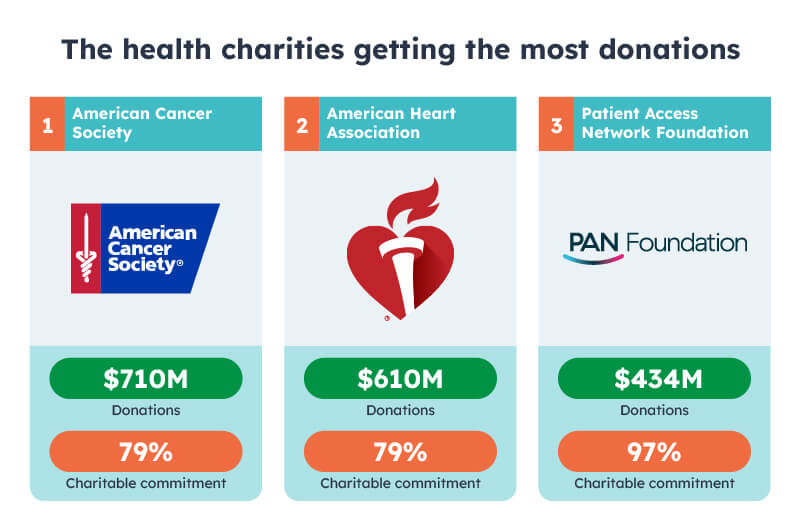 The COVID-19 pandemic put added pressure on many people’s physical and mental health. From limited access to healthcare to a lack of affordable medication, there has been an increasing demand for support from charities and organizations.

Below are the health charities that had the highest amount of donations in the latest fiscal year.

The American Cancer Society received the most private donations out of all health charities in the States. The charity made $710 million in donations in a single year.

79% of all expenses from the American Cancer Society went directly towards its purpose of medical research and supporting cancer patients.

The American Heart Association dedicated 79% of its spending on directly supporting the charity’s purpose.

The Patient Access Network Foundation helps patients get the medication they need access to, despite a lack of insurance.

The charity received $434 million in donations in just one fiscal year, making it one of the most highly funded health charities in America.

97% of the network’s total expenses went directly towards supporting the cause, instead of management, marketing, and fundraising efforts.

Although some health charities provide support to the 41 million Americans who are medically uninsured or underinsured, free clinics are an essential part of the safety net.

The first free clinic opened in 1967, and clinics today are dedicated to offering medical services for disadvantaged people. They perform medical checks and procedures at a lower cost subsidized by the government and private donors, or for free.

Although free clinics bridge the gap between the economically disadvantaged and citizens with health insurance, the organizations operate on a local level and struggle to treat all patients that would benefit from their services. Most medical staff at free clinics are volunteers from the local medical community. The American Journal of Medical Studies recorded there are on average 156.7 volunteer staff and 6.9 paid employees per clinic – a statistic that is especially worrying in the current circumstances of Covid-19 which has left many less fortunate Americans struggling to access treatment.

The National Association of Free and Charitable Clinics, which oversees participating member free clinics in the country, reported that free clinics have requested over $16 million worth of funding since the start of the pandemic. Private companies have donated $4.25 million to date, showing the need for greater support.