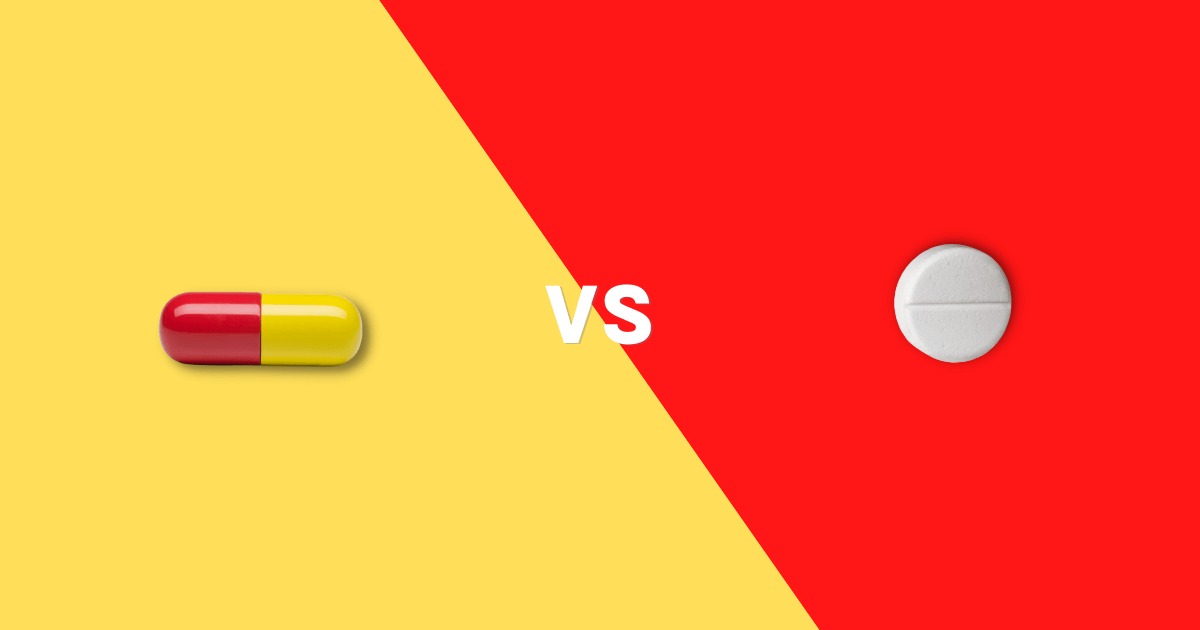 Capsule vs tablet: what’s the difference?

Wondering which one is right for you? Although capsules and tablets work similarly, there are some differences between them. In some circumstances, one form may be more suitable for you.

Learn more about the advantages and disadvantages of tablets and capsules to help you make an informed decision.

What is a tablet?

A tablet is a small, round, solid piece of medication that is taken orally. Tablets are usually made of compressing powder and can come in different shapes and sizes.

Tablets are manufactured by compressing powdered ingredients together to manufacturer a solid tablet that is absorbed in the digestive tract.

In most cases, tablets also contain inactive ingredients or excipients for binding all of the ingredients in the tablet together.

Tablets are primarily manufactured in three shapes: oblong, round, or disc-shaped. Oblong tablets are also referred to as caplets, which are easier to swallow.

Some tablets have a line across the middle of the pill, which makes the tablet easier to break in half.

As well, some tablets are manufactured with a special coating for preventing the medication from breaking down in the stomach,  which helps to ensure that the tablet will only dissolve after it has entered the small intestine.

Chewable tablets are intended to be chewed before being swallowed and absorbed rapidly in the stomach, resulting in a quick onset of action. They may come in various flavors.

Manufactured to dissolve rapidly on the tongue without water, going directly into the bloodstream and working the fastest.

Placed under the tongue to dissolve and be rapidly absorbed into the bloodstream.

Dissolved in water to form a solution or suspension and drunk orally. They come in various fruit flavors and may contain antacids or decongestants.

What is a capsule?

Capsules are medications that are enclosed in an outer shell that is absorbed in the digestive tract. The medication in the capsule is absorbed into the bloodstream and is distributed and metabolized similar to medication that is formulated in a tablet.

There are two common types of capsule forms: hard-shelled capsules and soft-gel capsules.

Soft-gel capsules are made of a soft, gelatinous outer shell and contain a liquid form of medication. The outer shell is made of gelatin and glycerin, and the inner portion contains the medication.

What are the key differences between capsules and tablets?

While both capsules and tablets are safe to take, there are various differences between them. Here is a breakdown of the key differences:

Capsules are typically made of gelatin or vegetarian-friendly alternatives and contain a powder or liquid form of medication.

Tablets are usually made of compressed powder.

Capsules offer better protection against stomach acids so the medication is not degraded. Capsules are composed of two parts: an inner suspension and an outer shell. The inner suspension may be in liquid, semisolid, or powdered form while the outer shell is usually made of gelatin. Capsules can have a higher level of bioavailability that results in the medication entering your bloodstream, making capsules slightly more effective than tablets.

Tablets are compressed powders that may contain binders, fillers, disintegrates, and other inactive ingredients.

Capsules can mask the taste of the medication, while tablets may have a bitter taste. As a result, capsules are less likely to have an unpleasant taste or odor.

Capsules generally have a longer expiration than tablets.

Gelatin, which is derived from animal products, is used to make soft-shell capsules, which may not be desirable for vegetarians. Capsules can also be made from vegetarian-friendly alternatives. Tablets do not generally contain gelatin.

Capsules come in a limited variety of sizes. Tablets also come in a variety of sizes, but they can be easily broken in half if needed. As there is a limited amount of space in a capsule, larger formulations are sometimes more practical to be formulated in a tablet as they allow tablet manufacturers to pack more product into a smaller space than with capsules or other delivery systems.

Capsules generally cannot be split. Tablets that are scored can be easily split in half.

Capsules are not chewable. Tablets can be made into chewable form, but they may not taste as good as capsules.

Tablets can be split so patients may not follow their prescribed dose. On the other hand, capsules cannot be split so the patient will need to take the entire pill as prescribed by their doctor.

Capsules offer better protection against stomach acids so the medication is not degraded. Capsules are composed of two parts: an inner suspension and an outer shell. The inner suspension may be in liquid, semisolid, or powdered form while the outer shell is usually made of gelatin. Tablets are compressed powders that may contain binders, fillers, and other inactive ingredients. Consequently, tablets generally have better absorption than capsules.

Difference between capsule and caplet

A capsule is a two-piece enclosure, typically made of gelatin, that contains a powder or liquid form of medication. A caplet is a solid dosage form that resembles a capsule in shape but is usually coated to make it easier to swallow. Capsules are generally not coated and are meant to be swallowed whole. Caplets may be coated with an enteric coating, which protects the medication from being degraded by stomach acids. Capsules are not coated and may irritate the stomach lining.

What are the disadvantages of capsules?

What are the disadvantages of tablets?

What are some tips for swallowing large pills?

Both capsules and tablets may present challenges with swallowing. Tablets are hard and stiff, and some types of tablets could be more challenging to swallow than others. As well, some capsules can be large and difficult to swallow, especially particularly soft gel capsules.

There are some recommended strategies that you can try to make it less challenging to swallow a capsule or tablet.

Tablets vs capsules: which is better?

It depends on your individual circumstances. The best form is the one that is most effective for the person who is taking the medication. While both capsules and tablets have a similar purpose, they have some differences as well.

Tablets come in a various forms and have a longer shelf life than capsules. They also contain higher doses of the active ingredients than capsules can accommodate. Tablets are slower acting than capsules, and in some cases, tablets may disintegrate unevenly in the body.

Capsules are faster acting than tablets, as the majority, if not all, of the drug is absorbed in the body once the capsule is taken. However, capsules generally expire more quickly than tablets, and cost more money.

If you are allergic to certain additives, require a vegan option that excludes capsules as an option for you, or have challenges swallowing large pills, speak with your doctor who will help you identify the best capsules or tablet for your needs.

If you still aren’t sure which one is better for you, speak to your healthcare for medical advice.

24 hour pharmacy near me

If you are looking for a 24 hour pharmacy near you, there are a few ways to find one which we will list in this art...