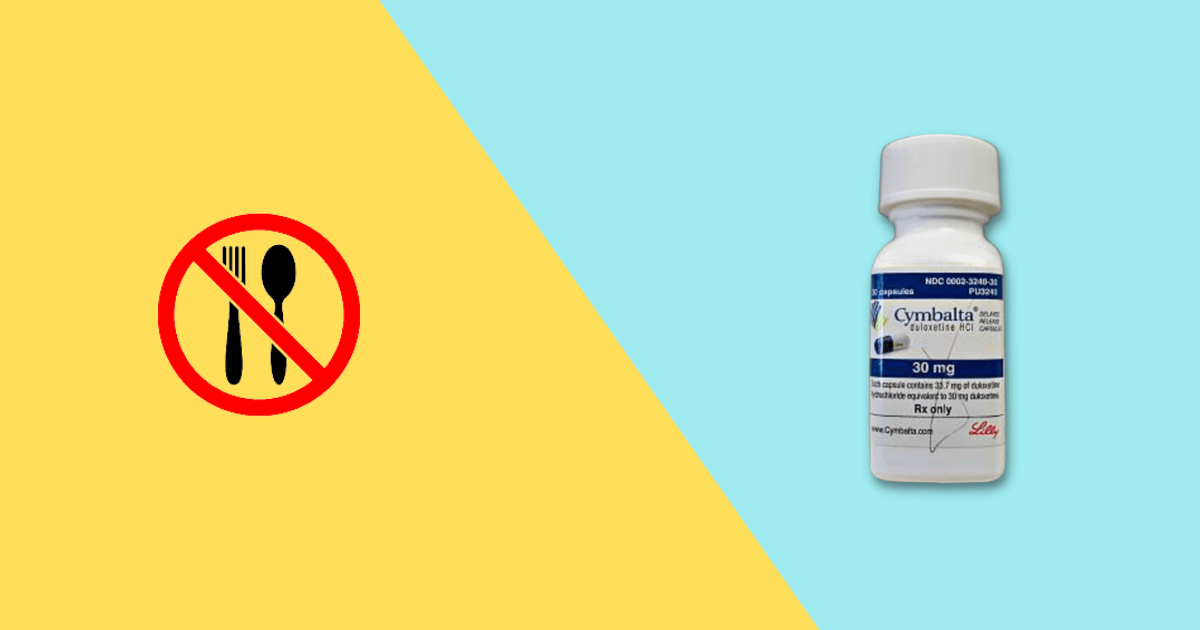 Foods to avoid while taking Cymbalta

Unless your healthcare provider instructs you to avoid certain foods, it is ok to stick to your regular diet while taking Cymbalta.

The active ingredient in Cymbalta is called duloxetine, a type of antidepressant called a serotonin-norepinephrine reuptake inhibitor (SNRI). Usually, any excess serotonin and norepinephrine is quickly re-absorbed by the neurons that create it. Duloxetine stops this happening (reuptake inhibition), causing concentrations of serotonin and norepinephrine to build up in the brain. These chemicals influence your thoughts, mood, and emotions, and increasing their levels is associated with a reduction in depression and anxiety.

Cymbalta also works as an analgesic, reducing the pain you feel. It likely does this by reducing the sensitivity of your nerves to pain and by blocking the way pain signals are sent around your body.

How do I know if Cymbalta is working?

Improvement in sleep, appetite, or energy may be seen within the first couple of weeks of treatment with Cymbalta. These improvements in symptoms are an early sign that the treatment is working. It may take up to 2 months to see an improvement in mood or a lack of interest in daily activities.

What are the side effects of Cymbalta?

The most common side effects of Cymbalta in clinical trials include:

More serious side effects of Cymbalta include:

These aren’t all the side effects Cymbalta may cause. You can find more details in the patient leaflet that comes with your medication. If you have any concerns about adverse effects, talk to your physician or pharmacist. You may report side effects to FDA at 1-800-FDA-1088 or at www.fda.gov/medwatch.

What are the long-term side effects of Cymbalta?

Long-term side effects of Cymbalta are associated with what is known as discontinuation syndrome after the last dose of Cymbalta leaves the body. These symptoms can be life-threatening.

Cymbalta can cause withdrawal symptoms, suicidal thoughts and behaviors, especially in teenagers and young adults. Patients are advised to consult their doctor on how to taper down their dose safely before stopping treatment with Cymbalta.

Stopping treatment with Cymbalta suddenly may cause the re-emergence of symptoms such as confusion, dizziness, headaches, mood swings, increased thoughts of suicide, and general tiredness. Cymbalta withdrawal symptoms may also occur, these include seizures, nausea, vomiting, nightmares, muscles aches, and sexual dysfunction.

Long-term side effects may continue for weeks or months after stopping treatment with Cymbalta, regardless of whether Cymbalta has left your system or not.

What are Cymbalta side effects in females?

Females may have symptoms of serotonin syndrome, such as hallucinations, agitation, sweating, fever, increased heart rate, loss of coordination, muscle twitching or stiffness, nausea, and vomiting.

Don’t take Cymbalta if you:

Talk to a healthcare professional about your medical condition before taking Cymbalta if you:

Can you drink caffeine with Cymbalta?

Consuming drinks high in caffeine such as coffee can increase your risk of developing serotonin syndrome. Symptoms would include hallucinations, agitation, sweating, fever, increased heart rate, loss of coordination, muscle twitching or stiffness, nausea, and vomiting.

What does Cymbalta do to your stomach?

Cymbalta may cause abdominal pain but this is not a common side effect. Pain in the stomach area could be a sign of liver problems.

Does Cymbalta cause weight gain?

Weight loss is more common with Cymbalta than weight gain in the first 8 to 9 weeks of Cymbalta treatment, with some weight gain possible after 8 months of treatment. Weight loss may be due to side effects such as nausea or loss of appetite. Speak to your healthcare provider for medical advice.

Can I have a glass of wine while taking Cymbalta?

Drinking alcohol is not advised while taking Cymbalta. Alcohol consumption may increase your risk of liver damage, worsen side effects and make Cymbalta less effective for the treatment of anxiety or depression.

Decreased appetite and weight loss is commonly associated with serotonin and norepinephrine reuptake inhibitors such as Cymbalta due to gastrointestinal side effects.

Who should not take Cymbalta?

Do not take Cymbalta if you:

How to lose weight while taking Cymbalta

Cymbalta has been seen to cause a small amount of weight loss in the first few weeks of treatment. Maintaining a healthy well balanced diet, rich in fruits and vegetable, and low in fatty foods high in salt or sugar, as well as physical activity such as exercise is the best way to lose weight while taking Cymbalta.

What should I avoid while taking Cymbalta?

You do not need to avoid any particular foods while taking Cymbalta. However, avoid MAO inhibitors such as isocarboxazid, metaxalone, moclobemide, phenelzine, rasagiline, and tranylcypromine during treatment with Cymbalta.

Is it best to take Cymbalta at night or morning?

Cymbalta may be taken at any time of day, as long as you take it at the same time each day.

What can I eat when taking Cymbalta?

You can continue with your diet as normal as there are no interactions of any food types with Cymbalta.

Cymbalta can interact with other medications. These include:

When Cymbalta is taken with other medicines, they may interact and change how those work. It may also increase the severity and frequency of certain side effects. Make sure your healthcare provider is aware of all the medications you take, including prescription drugs, over-the-counter medications, vitamins, and herbal supplements.

Get your Cymbalta medication for only $49 per month through NiceRx.