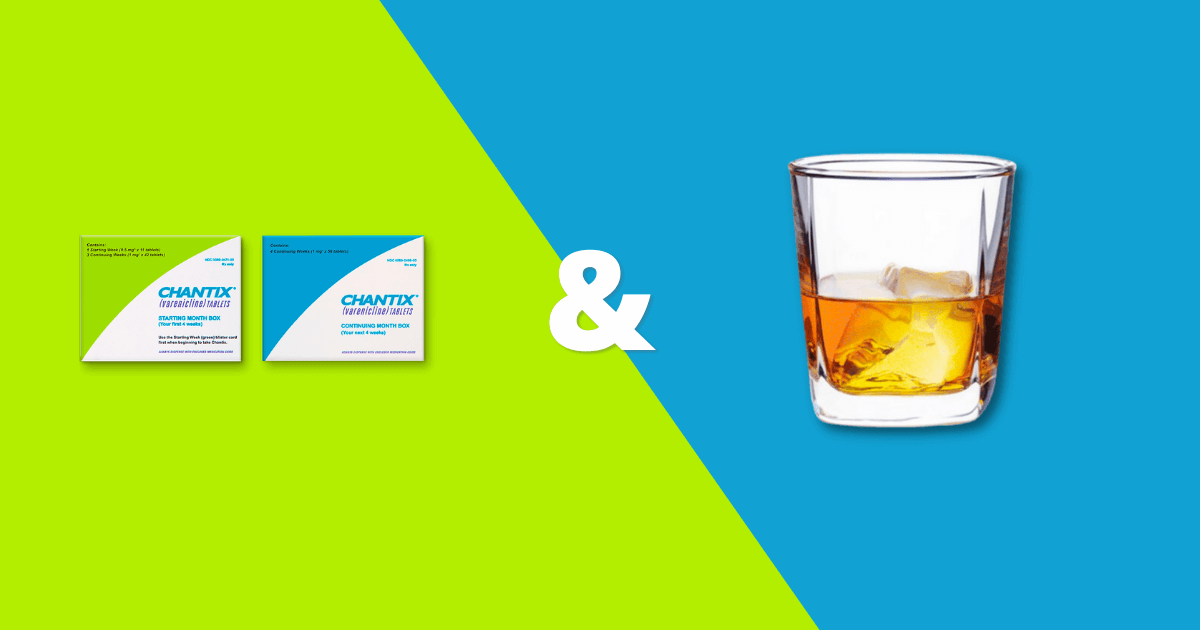 Chantix and alcohol: can they be used together?

Cigarette smoking is less common than it was a decade ago, but among those with substance use disorders, it remains highly prevalent. In fact, roughly 40% of heavy-drinking smokers admit alcohol abuse was a factor in their unsuccessful attempts to quit smoking. Naturally, this leaves you confused and puzzled over whether or not a drug like Chantix can be mixed with alcohol. Unfortunately, the risks of combining Chantix with alcohol may be dangerous to people who struggle with addiction. Nicotine increases the rewarding effects of alcohol and vice versa. Both habits are major public health concerns and put users at increased risk for diseases like coronavirus. If you are someone who is curious about taking Chantix while using alcohol, continue reading.

Chantix is manufactured by Pfizer for smoking cessation in adults. It contains the active ingredient varenicline and is approved by the U.S. Food and Drug Administration (FDA) for adults who want or need to stop smoking.

What does Chantix do to make you quit smoking?

Firstly you need to understand how nicotine from cigarettes affects you. When you smoke, nicotine is sent to your brain, where it attaches to nicotine receptors. A chemical called dopamine is released, making you feel good. Your dopamine levels then drop. This makes you want another cigarette. Dopamine is part of the reward system in the brain because when it’s released, it makes you feel calmer and happier.

So, what happens when you take Chantix? Chantix binds to nicotine receptors in the brain, taking the place of nicotine. Dopamine is still released, but in much less quantity than in response to nicotine. Over time Chantix causes this reduction in dopamine to help people reduce their cravings for cigarettes, slowly leading to finally quitting smoking.

It is important to remember not to use Chantix with a nicotine patch or any other nicotine replacement product. It may cause nausea, vomiting, headache, dizziness, and tiredness to happen more frequently than if you just used a nicotine patch alone.

What is the most important information I should know about Chantix?

Nicotine withdrawal symptoms will occur when you try to quit smoking including depressed mood, difficulty concentrating, and irritability. Some people have even experienced suicidal thoughts when trying to quit smoking without medication. Sometimes quitting smoking can lead to worsening of your pre-existing mental health problems, such as depression. Report side effects involving varenicline to the FDA MedWatch FDA Adverse Event Reporting System.

Why should I avoid alcohol while taking Chantix?

How effective is Chantix?

In a study published by The American Journal of Psychiatry, two prescription drugs, Chantix and naltrexone were given to 165 people for alcohol dependence. Participants taking both drugs together managed to cut their alcohol consumption from an average of seven beverages per day down to three. However, people taking just Chantix or a placebo reduced their alcohol use from seven drinks to four. Using Chantix alone produced similar results to using both medications at the same time. It is also important to note 20-25% of the patients in the study were also heavy drinkers.

Six large clinical trials by Pfizer involving 3659 heavy smokers looked at the effectiveness of smoking cessation medications. The clinical trials found that Chantix helped more people quit smoking compared with the nicotine patch and sustained-release bupropion (Zyban). This study included people both with and without a history of mental health conditions.

If you or your loved one is struggling with substance abuse or alcohol use disorder talk to your healthcare provider to discuss treatment options. Healthcare professionals can provide you with the most up-to-date and accurate information.

The National Institute on Drug Abuse is an online resource available for you or someone you are concerned about.