Like many other countries across the globe, Americans have to pay for prescription drugs, but how does the cost in the US compare to those around the world?

We would analyze OECD data to discover how much the cost of prescription medication has increased in the US over the past 10 years.

We will create an index that analyses and compares the cost of prescription drugs in the US to countries around the world.

A concept which creates a real talking point and allows us to draw global comparisons while maintaining relevancy and a voice within the health space.

Where in the world pays the most for their medication?

People often say that nothing is more important than your health, and they’re not wrong. When you’re unwell it can be difficult to enjoy life, and all that occupies your mind is getting better again. However, being unwell or having health conditions can not only be uncomfortable and problematic but can also put a big strain on your finances.

Whether you’re taking budesonide for your asthma or lisdexamfetamine for ADHD, the costs of your prescriptions can quickly add up. This has led many people to search for affordable medications online or even cross borders to purchase them at better prices.

With people going to such lengths to be able to afford their prescriptions, we wanted to find out just how much the average American spends on medication each year, and how this compares to people in other countries.

We’ve put together the Global Prescription Index to reveal which countries spend the most on their prescriptions, and how prices have changed over the years.

US spending on medication per year

The table below shows how much is spent on prescriptions per capita in the United States each year, from 2000 up to the most recent data from 2018. You can also see the year-on-year percent change in prescription spending. 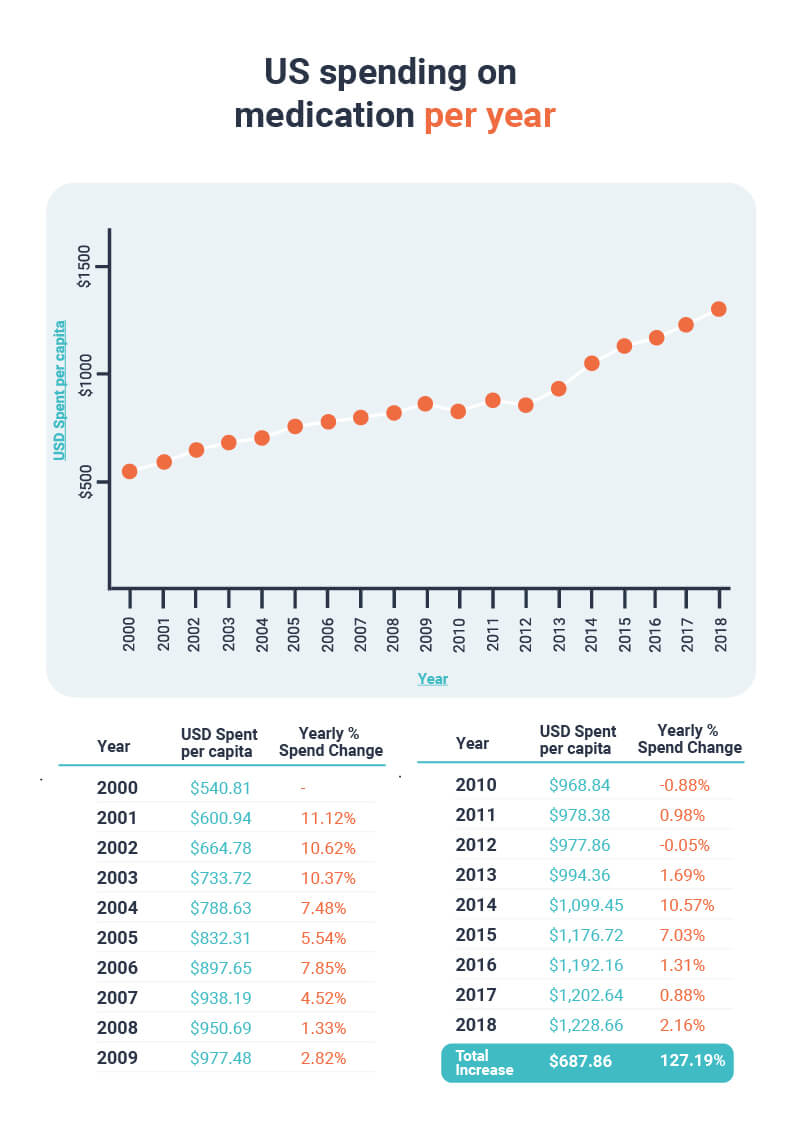 This is a huge amount to be spending each year, especially when money is tight or if you’re trying to save enough for a deposit. For those on lower incomes, it poses a serious risk of falling into debt, especially if your condition begins to worsen.

The countries that spend the most on prescription medication

Below you can see the top ten countries that spent the most money on medication in 2018. 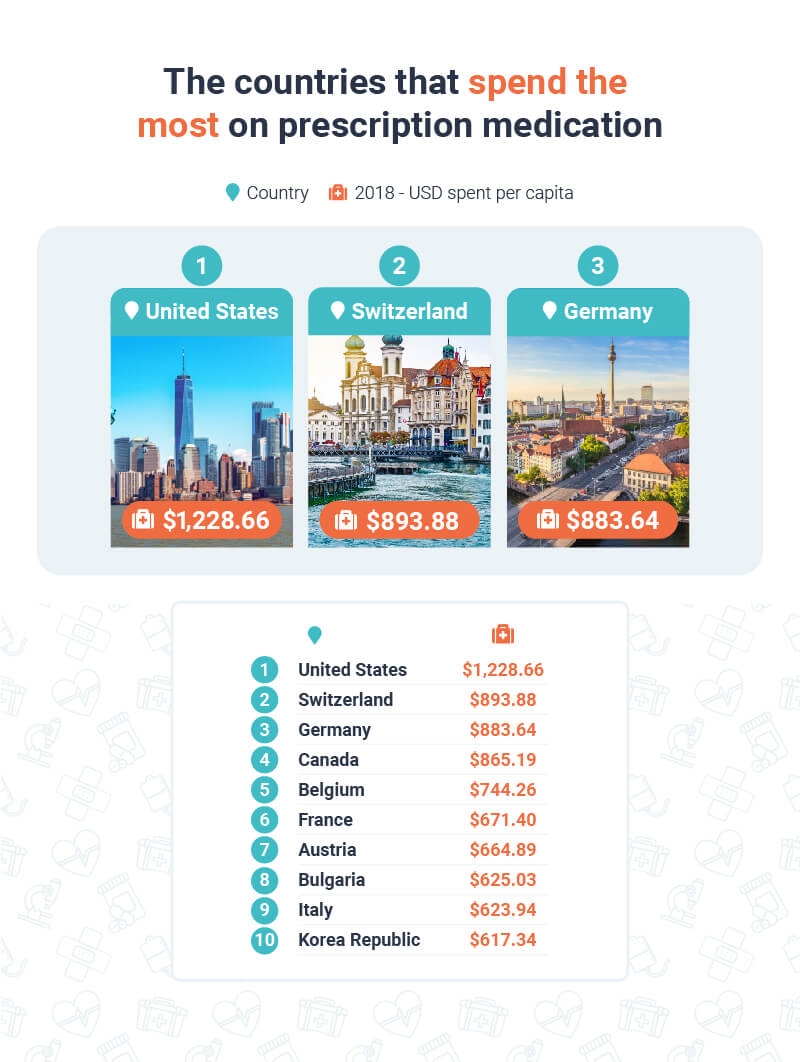 The USA is the country that spent the most on medication per capita in 2018, spending over $330 more per capita than any other country. This is a result of the rising cost of many prescription medications, leading to financial difficulties for many Americans, regardless of their insurance status.

Switzerland has the second-highest spending on prescriptions, having spent $893.88 per capita on medication in 2018. Switzerland has a very highly regarded healthcare system that requires all residents to have private health insurance by law. However, with average salaries in the country standing at around 124,000CHF (Approx. $134,410), this is relatively much more affordable than it might seem at first glance.

In third place is Germany, with a prescription medication spend per capita of $883.64, which is only a fraction less than is spent in Switzerland. This level of spending represents a considerably more attractive scenario than in the USA, as the ratio of cost is about $7 spent in the States for every $5 spent in Germany.

It’s also worth noting that Canada places fourth, spending $865.19 per capita on medication. Even with spending in the country being the fourth highest, Americans will still make the trip across the border to take advantage of the relatively lower prices. This highlights just how expensive medication in the US has become.

The countries where prescription spending has increased the most

Here we’ll look at the countries that experienced the greatest increase in spending on medication in the five years from 2013 to 2018. 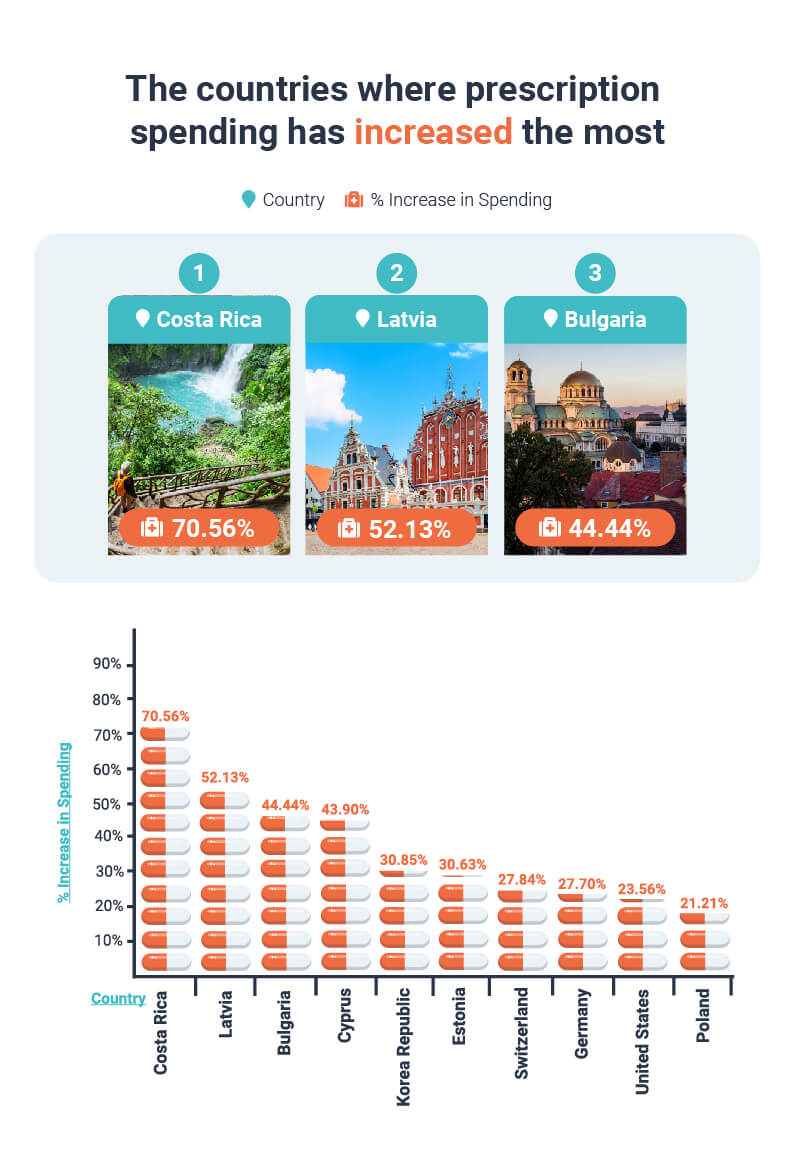 Costa Rica experienced by far the greatest increase in spending per capita on medication between 2013 and 2018, reaching 70.56% higher levels in the country. As a territory of the United States, it might be playing some catch-up, as actual levels of spending were only $275.04 per capita in 2018. That’s almost $1000 less than in the USA!

Latvia experienced the second-highest increase in spending on prescriptions and medication, with spending levels increasing by 52.13% in just five years. This brought the spending per capita on medication in the country to $491.72, which is still less than half the amount spent in the States.

In third place is Bulgaria, where the amount spent per capita on pharmaceuticals rose by 44.44% to $625.03. Despite being barely more than half the amount spent in the USA, this is actually relatively expensive as the average salary in Bulgaria is around 39,600BGN (Approx. $24,010). This means that medication costs could take up around 2.6% of your income in Bulgaria.

Meanwhile, the United States placed ninth with an increase of 23.56% over the five-year period. This is a considerable increase considering spending per capita in the US was already by far the highest in 2013 at $994.36 and has allowed the gap between the US and the next highest spending country to increase from $295.12 in 2013 to $334.79 in 2021.

Here’s our full list of the 35 countries for which complete data was available. All countries are ranked according to the amount spent on medication per capita in 2018. 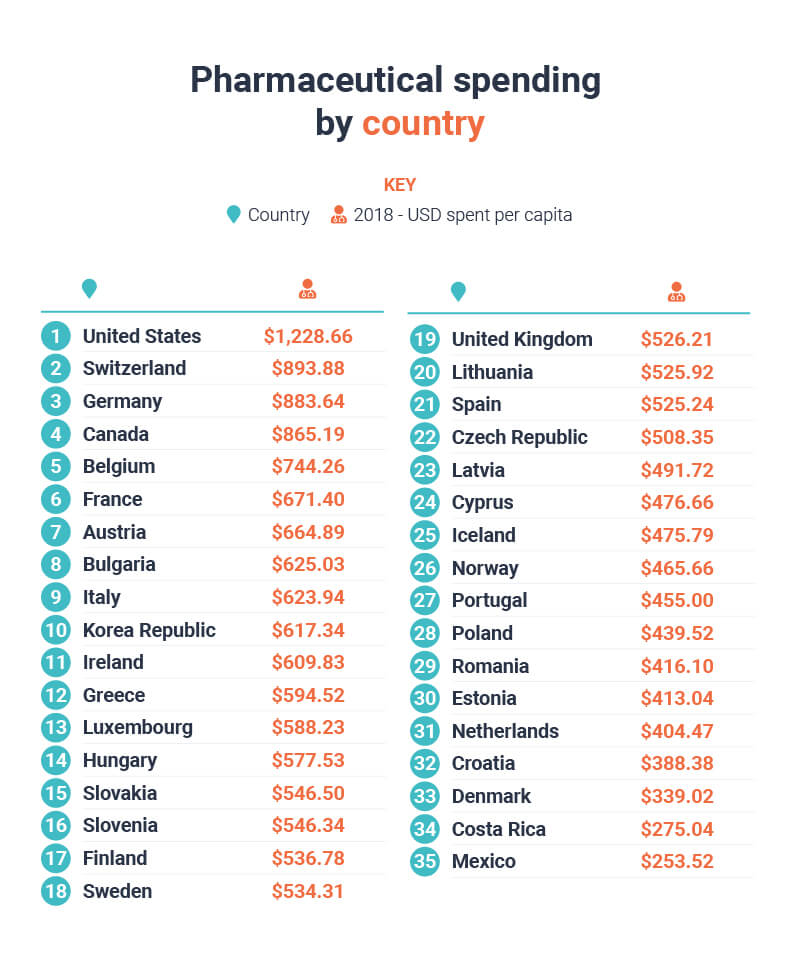 Changes in pharmaceutical spending per capita by country

Below you can find the % changes in spending per capita on medication for each of the 35 countries, ranked from the highest increase to the greatest decrease. 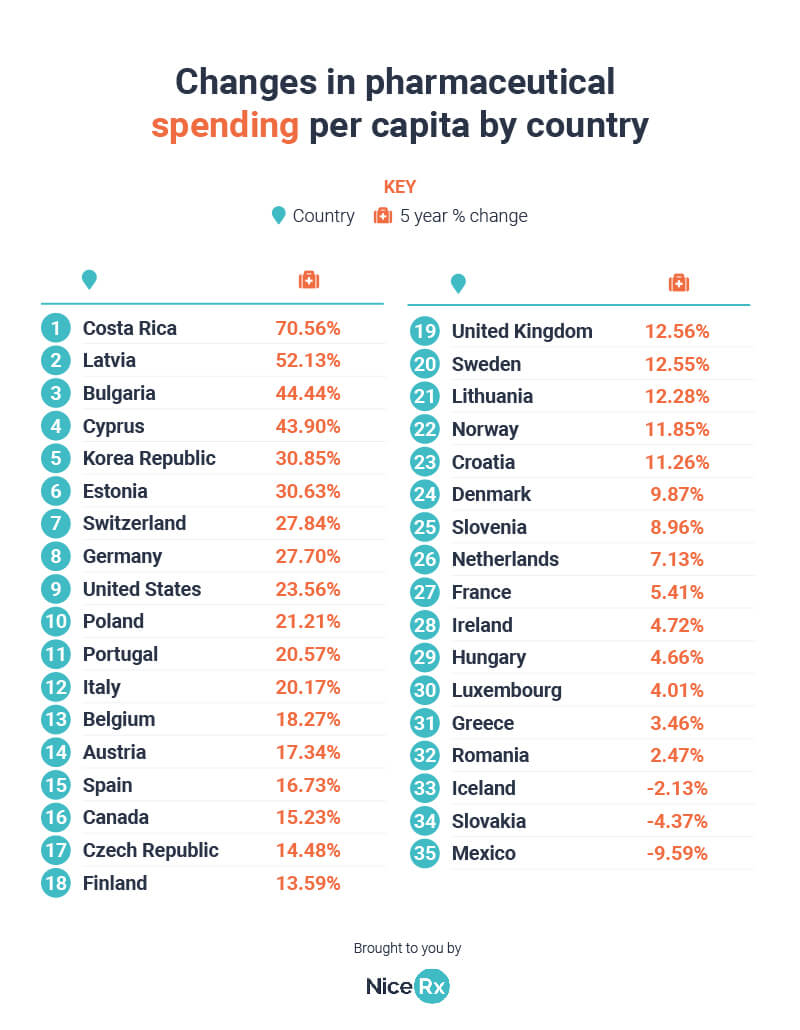 We wanted to find out how much people spend on medication in the United States, and compare it with other countries around the world. To do this, we used OECD data on the amount spent on pharmaceuticals in 35 countries from 2013 up to 2018. The majority of countries did not have data for more recent years, so the most recent year with complete data was chosen, along with the previous 5 years in order to show how rates of spending had changed.

The data was ordered from highest 2018 spend to lowest and ranked accordingly. This allowed us to draw a direct comparison between the rate of spending in the US and that of other countries.

Next, we calculated the change in spending between 2013 and 2018 and presented it as a percentage figure. Again, we ranked the countries from the highest increase to the greatest decrease. This gave us insight into how spending on medication is changing from country to country.