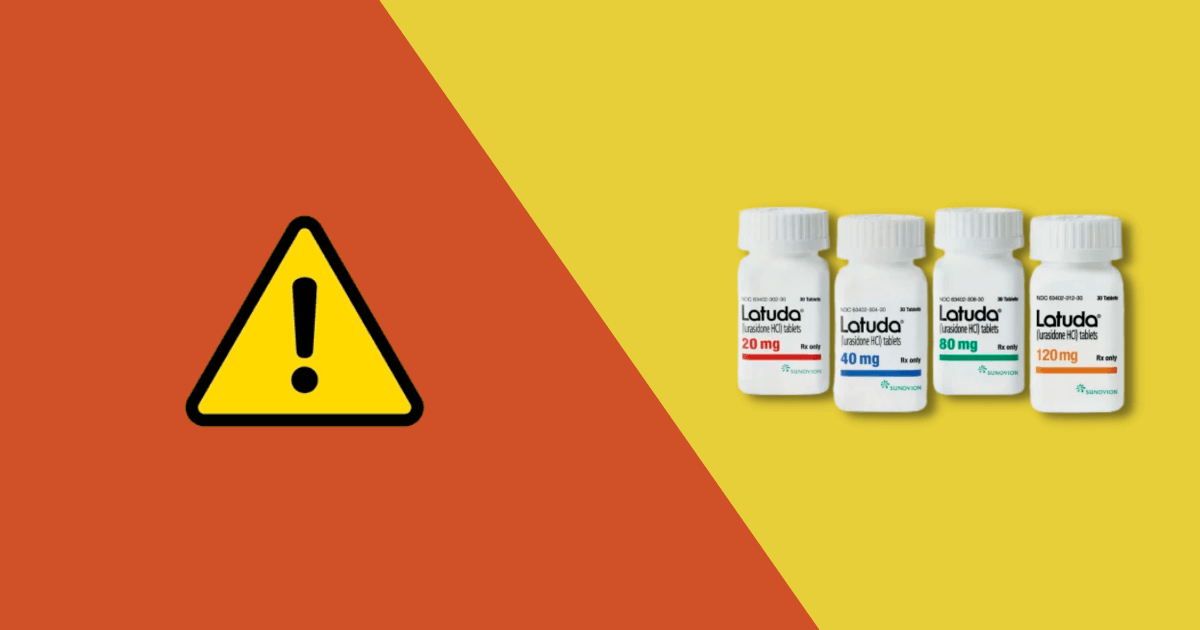 Latuda side effects and how to avoid them

Latuda is the brand name of an FDA-approved drug to treat mental illness. Latuda can cause adverse reactions. The most common side effects tend to be drowsiness and trouble sleeping, to serious movement disorders and worsening mental health. Learn more about the most common Latuda side effects and how to avoid them.

Latuda is a medication that belongs to a group of drugs called antipsychotics. It is used for the treatment of bipolar disorder and schizophrenia in adults. It is a central nervous system depressant, which means it reduces activity in parts of the brain. This reduced activity helps to ease the symptoms of both conditions.

Schizophrenia is a mental disorder that causes episodes of psychosis. In these periods you may see or hear things that aren’t really there, have delusional thoughts, and become unusually suspicious. Other symptoms can include difficulties thinking, social withdrawal, and a lack of motivation. Schizophrenia is thought to be caused by a mixture of genetics and events in your life.

Bipolar disorder, previously called manic depression, is another mental disorder. It causes periods of both depression and elevated mood. During the episodes of elevated mood, you may experience psychosis too, as well as excess energy and impulsive behavior. Bipolar disorder is also thought to be caused by both genetics and life events.

Latuda is prescribed to treat:

How does Latuda work?

Latuda contains an active ingredient called lurasidone, a type of atypical antipsychotic drug. When you swallow a Latuda tablet, it breaks down in your digestive tract and the lurasidone it contains is absorbed into your blood. The lurasidone is then transported to your brain in your bloodstream.

Once the lurasidone crosses the blood-brain barrier, it attaches to areas on your brain cells called receptors. These receptors are used to send messages between your brain cells and help to regulate your brain function. Chemicals produced by your brain, called neurotransmitters fit into the receptors, stimulating them and making them send a certain form of signal to the surrounding brain cells. By blocking some of your receptors, lurasidone reduces some areas of brain activity.

Lurasidone blocks receptors that are stimulated by the neurotransmitters dopamine and serotonin. These neurotransmitters help regulate areas of brain activity involved with mood, reward feedback, pleasure, cognition, learning, and memory. By reducing the signals sent by dopamine and serotonin, it is thought that lurasidone helps to normalize brain activity. And this has been shown to lessen the symptoms of schizophrenia and bipolar depression.

If you stop taking Latuda suddenly, you can experience withdrawal symptoms from the medication, called Latuda discontinuation syndrome. This can cause unpleasant withdrawal-like side effects, including nausea, restlessness, and uncontrolled muscle movements. In some cases, Latuda withdrawal can be severe.

Talk to your doctor if you want to stop taking Latuda. They may decrease your dose slowly to avoid Latuda discontinuation syndrome.

The most common side effects of Latuda include:

These are rarer, but can include:

Your doctor will assess your risk of side effects versus the benefits of taking Latuda. These aren’t all the side effects that Latuda can cause. To find out more, you can read more about Latuda side effects in the leaflet that comes with your medication. Talk to your doctor if you’re concerned about any side effects.

Latuda should not be taken with medicines called CYP3A4 inhibitors or CYP3A4 inducers, including:

Talk to your doctor if you take the following medicines with Latuda:

Don’t take Latuda if you:

Talk to your physician before taking Latuda if you:

How to avoid Latuda side effects

While completely avoiding Latuda side effects may not be possible, there are some things you can do to reduce their severity:

1. Stick to the recommended dosage

Take your prescribed dose that has been recommended by your healthcare professional. Stick to the same timing for taking your medication and taking it consistently will make a big difference in how well Latuda works for you. Food will help your body absorb Latuda more efficiently. Eat at least 350 calories before taking Latuda.
If you miss a dose of this medicine, skip the missed dose and go back to your regular dosing schedule. Do not double doses. Refer to the medication guide for more drug information.

Your temperature may fluctuate when taking Latuda, to avoid this keep cool and stay hydrated. Keep a water bottle with you and refill it on a regular basis.

Alcohol may worsen any side effects you may experience. Read our blog Latuda and alcohol: can they be used together? for more information.

4. Pay attention to your body

Paying attention to how your body feels when taking Latuda is important, taking particular attention to worsening symptoms or new symptoms. Talk to your doctor straight away for medical advice if you start to experience any side effects of Latuda when taking it.

Discussing your medical history with your prescribing healthcare provider is important to help them understand how well Latuda will work for you. Give a complete list of all the prescription drugs, including over-the-counter meds, supplements, and medical conditions you may have. Talking with your doctor will also allow them to pick up any drug interactions with Latuda that may increase possible side effects.

Get your brand name medication for only $49 per month through NiceRx.