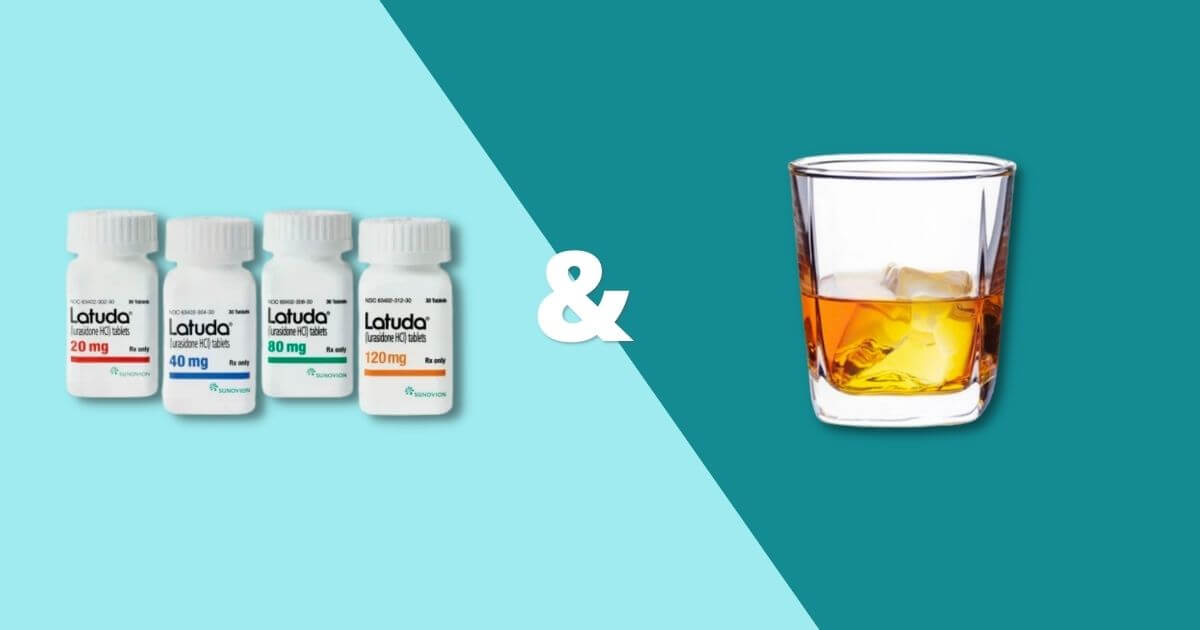 Alcohol use can make it extremely challenging to control the symptoms of schizophrenia and bipolar disorder. Studies have shown that people with these medical conditions struggle significantly more with substance abuse. Latuda can help with schizophrenia and bipolar disorder but when taken with alcohol the side effects are amplified leading to possible life-threatening situations. Medical professionals advise against mixing the two substances. Read on to gain a better understanding of why it’s not a good idea to mix the two.

Latuda is the brand name of a prescription drug called lurasidone. It belongs to a class of drugs called atypical antipsychotics and is indicated for the treatment of bipolar disorder. Atypical antipsychotics are used in adults, alone or in combination with mood stabilizer drugs such as lithium or valproate. Other antipsychotic drugs in this drug class include quetiapine (Seroquel), and aripiprazole (Abilify).

The dominant symptom of bipolar I disorder is manic episodes that last 7 days which may or may not lead to hospitalization. Also, a depressive episode referred to as bipolar depression lasting typically two weeks will normally occur. These manic and depressive episodes can happen separately or at the same time.

In children, 10 years of age and older Latuda is approved to treat major depressive episodes related to bipolar depression. For this purpose, Latuda may be used alone. Studies show that antidepressants may increase the risk of suicidal thoughts and behaviors in children and young adults.

Schizophrenia is a serious mental illness that changes how a person thinks, feels, and behaves. People with schizophrenia experience hallucinations, disordered thoughts, and delusions. Latuda is approved to treat adults and adolescents ages 13-17 years of age with schizophrenia. It is not approved for use in older adults with dementia-related psychosis due to an increased risk of death.

What are the side effects of Latuda?

The most serious side effects of Latuda include:

The most common side effects of Latuda include:

Latuda can interact with different types of drugs. These drugs include:

This is not a complete list of drug interactions for Latuda. Consult your healthcare provider for medical advice and tell them about all the medicines you take, including prescription and over-the-counter medicines, vitamins, and herbal supplements.

Is Latuda safe in pregnancy and breastfeeding

What can happen if I drink alcohol with Latuda?

Alcohol and Latuda have many common side effects because they are both central nervous system depressants. Alcohol can cause a worsening of symptoms and side effects of bipolar disorder or schizophrenia. You are at increased risk of some of the following side effects when you combine the two:

The clinical studies of Latuda do not include people with a history of alcohol abuse which means no data showing the specific interaction between Latuda and alcohol use exists. According to Lupin Pharmaceuticals the manufacturers of Latuda, people should avoid drinking alcohol as it may worsen the side effects of Latuda. If you take atypical antipsychotics, talk with your healthcare provider before drinking any alcohol.

Latuda side effects and how to avoid them

Latuda is the brand name of an FDA-approved drug to treat mental illness. Latuda can cause adverse reactions. The m...

Does Latuda cause weight gain?

Mental illnesses such as schizophrenia and bipolar disorder are associated with weight gain. Several factors can co...