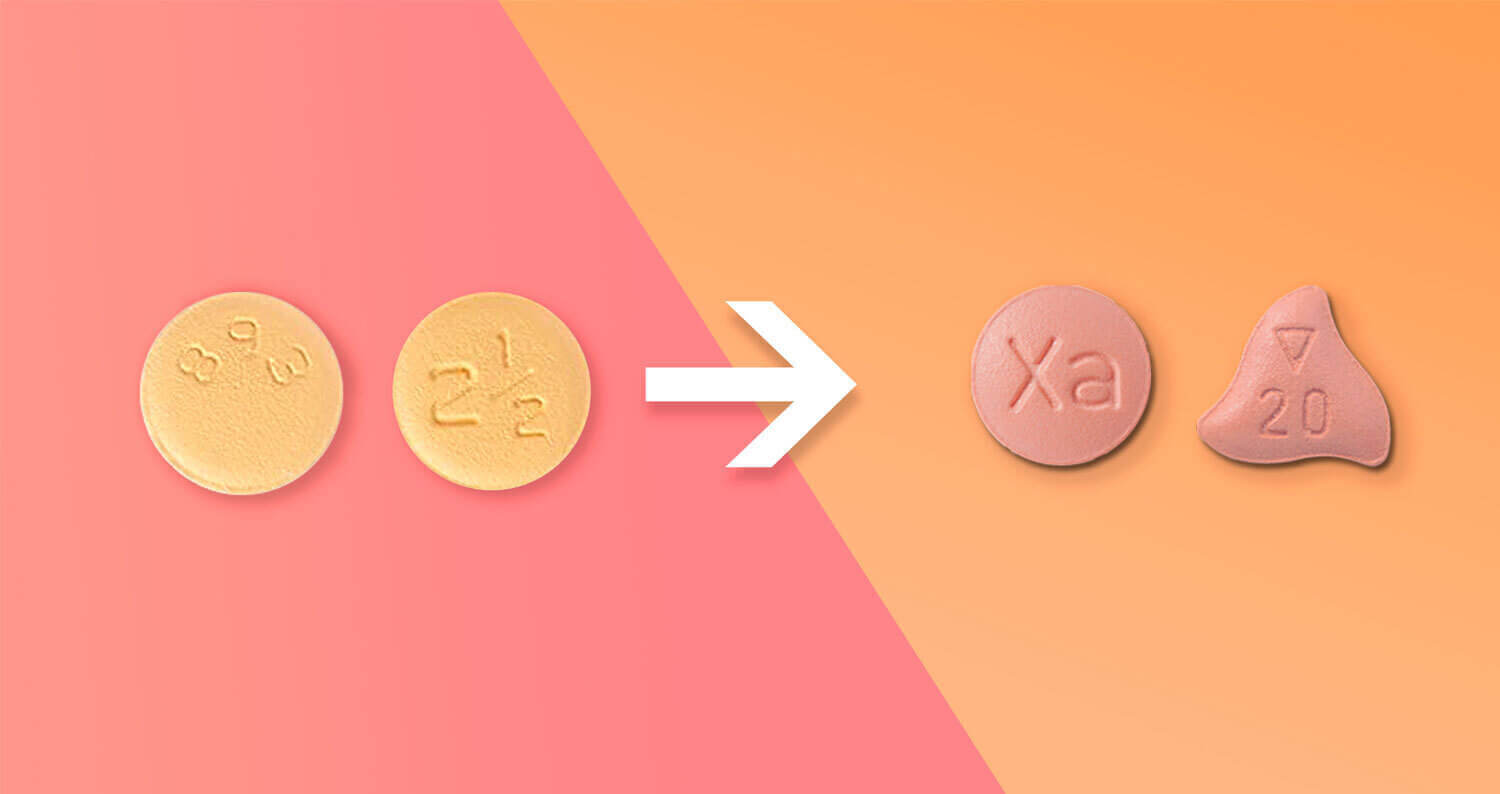 Switching from Eliquis to Xarelto

It is not uncommon to want to transition from one anticoagulant drug to another. There are many different reasons. It could be the cost, your personal preference, other medical conditions you may have, a hospital stay, bleeding complications, or you’ve had a procedure. Before switching from Eliquis to Xarelto, let’s take a brief look into how these two drugs work.

What are Eliquis and Xarelto?

Eliquis and Xarelto are brand names for blood thinners used to prevent blood clots. Both are prescription drugs approved by the FDA. Eliquis is manufactured by Bristol-Myers Squibb. Xarelto is made by Janssen Pharmaceuticals. Both drugs are direct oral anticoagulants (DOAC) classed as factor Xa inhibitors. They work by directly blocking a single blood clotting factor in the body called Factor Xa. In contrast, warfarin targets various clotting factors.

These drugs were developed as an alternative to warfarin (Coumadin) to reduce the need for regular blood tests for INR (International Normalized Ratio) monitoring to ensure levels remain in a therapeutic range. INR is a laboratory measurement of how long it takes blood to clot, therefore it monitors bleeding risk.

What do Eliquis and Xarelto treat?

Eliquis and Xarelto can be used for some of the following indications:

The American College of Cardiology, the American Heart Association, and the Heart Rhythm Society guidelines recommend direct oral anticoagulants (DOACs), such as apixaban (Eliquis), rivaroxaban (Xarelto) dabigatran (Pradaxa made by Boehringer Ingelheim), and edoxaban (Savaysa) for most people with atrial fibrillation (Afib). There are some exceptions e.g. people with mechanical heart valves and moderate to severe mitral-valve narrowing should still use warfarin. Warfarin and low molecular weight heparin (LMWH) are also referred to as Vitamin K antagonists.

Get your blood thinner medication for only $49 per month

How do you switch between anticoagulants?

Your doctor will carry out a renal function test called creatinine clearance values (CrCl) before switching from some drugs. CrCl 30 is a value that shows moderate renal impairment. It is particularly important to have this test if you are taking an anticoagulant dose that is renally adjusted.

There are five scenarios that occur with DOAC therapy, switching from or to another anticoagulant:

If the CrCl level is >50 mL/min then start warfarin and stop dabigatran 3 days later.

If the CrCl level is 31 to 50 mL/min: start warfarin and stop dabigatran 2 days later.

If the CrCl level is 15 to 30 mL/min: start warfarin and stop dabigatran 1 day later.

Stop the current apixaban regimen and begin rivaroxaban at the time the next dose of apixaban is due. Due to the fast onset and offset of DOAC’s, bridging between treatments is generally not required.

The American Heart Association can give you more detailed guidelines on how to switch between anticoagulants.

Can I switch from Eliquis to Xarelto?

Yes, but it is necessary to have a consultation with your prescribing physician before switching from Eliquis to Xarelto. The best drug for you can only be determined by your healthcare provider.

When switching from Eliquis to anticoagulants other than warfarin, you must first discontinue Eliquis, and begin taking Xarelto at the time the next dose of Eliquis was due.

Eliquis and alcohol: can they be used together?

Have you just picked up your Eliquis medication from the drug store? You may have noticed the alcohol warning label...

A common question many people ask is can Xarelto and alcohol be used together? Xarelto (rivaroxaban) has been known...

Anticoagulants, also described as blood thinners, are a group of drugs that reduce the ability of blood to clot. An...

What are blood thinners?

Blood thinner medications prevent blood from sticking together (coagulation) which increases the amount of time it ...

Eliquis and Xarelto are brand names for blood thinners used to prevent blood clots. Both are prescription drugs a...

Xarelto side effects and how to avoid them

Xarelto is a prescription drug approved by the U.S. Food and Drug Administration (FDA) to stop blood clots from for...

Plavix and Xarelto are brand names for blood thinners used to prevent blood clots. Both are prescription drugs ap...

Eliquis alternatives: which other blood thinners can I take?

No matter which blood-thinning medication you use, there will always be an increased risk of bleeding problems, but...

Get your blood thinner medication for only $49 per month through NiceRx.