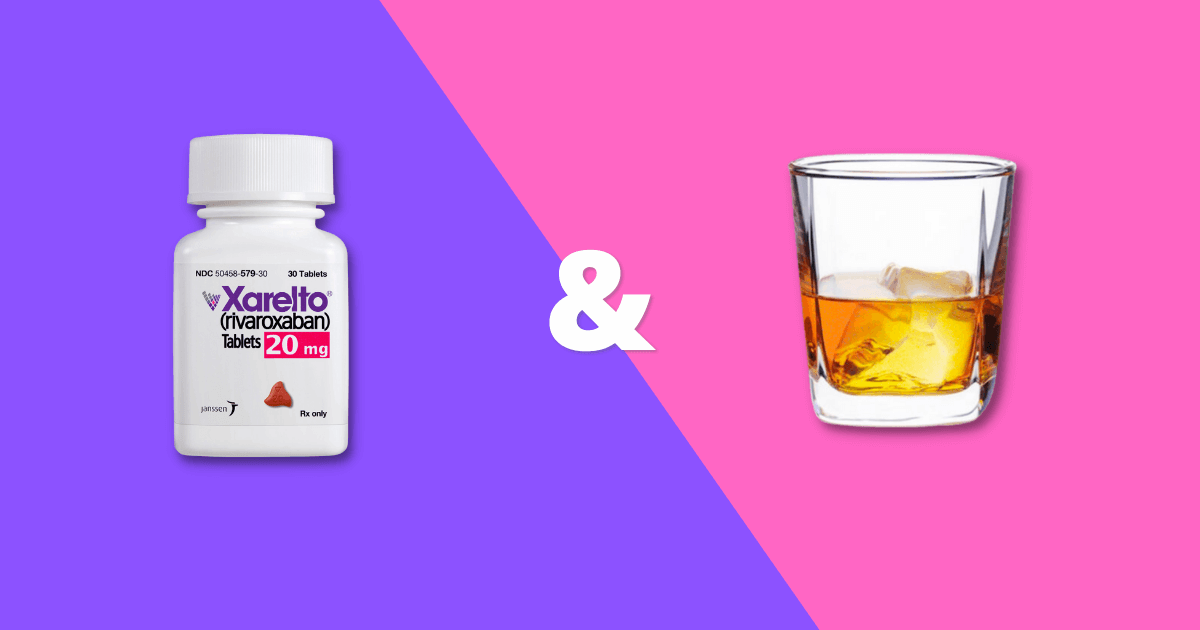 A common question many people ask is can Xarelto and alcohol be used together? Xarelto (rivaroxaban) has been known as a simple and convenient drug you can take after a meal or snack. Does the same apply to drinks, in particular to alcohol? The official line from Janssen Pharmaceuticals, the Xarelto website, and the FDA is that patients do not need to change their dietary habits while taking this drug. So, in an ideal world, there’s no harm to drink alcohol while taking Xarelto. Its mechanism of action isn’t affected by alcohol consumption. This may be the case but in the real world, healthcare professionals recommend against alcohol consumption with Xarelto. Read on to find the reasons why. Firstly let’s give you a quick re-cap on what Xarelto is and how it works.

What is Xarelto and how does it work?

Xarelto is a blood thinner that treats and helps prevent blood clots that are related to certain conditions involving the heart and blood vessels. It is used to treat some of the following conditions:

The blood clotting process involves a range of different components such as platelets and clotting factors, these factors are named and numbered and all play an important role. The blood clotting process is essential when you’re injured. Sometimes, however, a blood clot can appear in an artery that supplies your heart, brain, or lungs or a deep vein in the lower leg. When a clot blocks blood flow to your heart, it can cause a heart attack. If it blocks the blood flow to your brain, it can cause a stroke. The use of blood thinners in this group of patients is common.

Xarelto stops blood clots from forming and getting larger by blocking Factor Xa in the blood clotting process. Xarelto is a new kind of oral anticoagulant that does not require routine blood tests, unlike older drugs like warfarin (Coumadin).

Get your Xarelto medication for only $49 per month

Why is it important to avoid alcohol while taking Xarelto?

Research shows that small quantities of alcohol may have anticoagulant properties, working almost like blood thinners. Ethanol the scientific name for alcohol has been found to reduce levels of fibrinogen, another protein involved in blood clotting. A study published in 2015 found that drinking 2-3 alcoholic drinks a day reduced the amount of fibrinogen in the blood by 14%. So if we combine both Xarelto and alcohol it may result in an intensified anticoagulant activity in your blood.

Why is this dangerous? Alcohol and Xarelto are blood thinners and when both are combined the risk of side effects increases, in particular, higher risk of minor to major bleeding problems.

Minor bleeding such as nosebleeds, bruising and bleeding gums may occur. Major bleeding events such as menstrual bleeding that is heavier than normal, coughing up blood, and severe headaches are possible too. Internal bleeding is the most dangerous because it is more difficult to detect and life-threatening.

You may have a higher risk of bleeding if you also take some of these drugs:

How much alcohol is safe to drink with Xarelto?

Your alcohol intake has differing effects on the body depending on how much is consumed with blood-thinning medications:

According to The U.S. Dietary Guidelines for American adults, moderate drinking is classed as follows:

Exceeding the recommended guidelines of alcohol use is considered heavy drinking, and an excessive amount of alcohol (binge drinking) with Xarelto may result in extreme blood-thinning due to the combined effect.

Comparing Xarelto alternatives: which other blood thinners can I take?

Direct oral anticoagulants (DOACs) are blood thinner prescription drugs that have a rapid onset of action and requi...

Switching from Eliquis to Xarelto

It is not uncommon to want to transition from one anticoagulant drug to another. There are many different reasons. ...

You have probably experienced some unpleasant side effects if you’ve mixed drinking with prescription medicat...

Eliquis and Xarelto are brand names for blood thinners used to prevent blood clots. Both are prescription drugs a...

Xarelto side effects and how to avoid them

Xarelto is a prescription drug approved by the U.S. Food and Drug Administration (FDA) to stop blood clots from for...

Plavix and Xarelto are brand names for blood thinners used to prevent blood clots. Both are prescription drugs ap...

Get your Xarelto medication for only $49 per month through NiceRx.