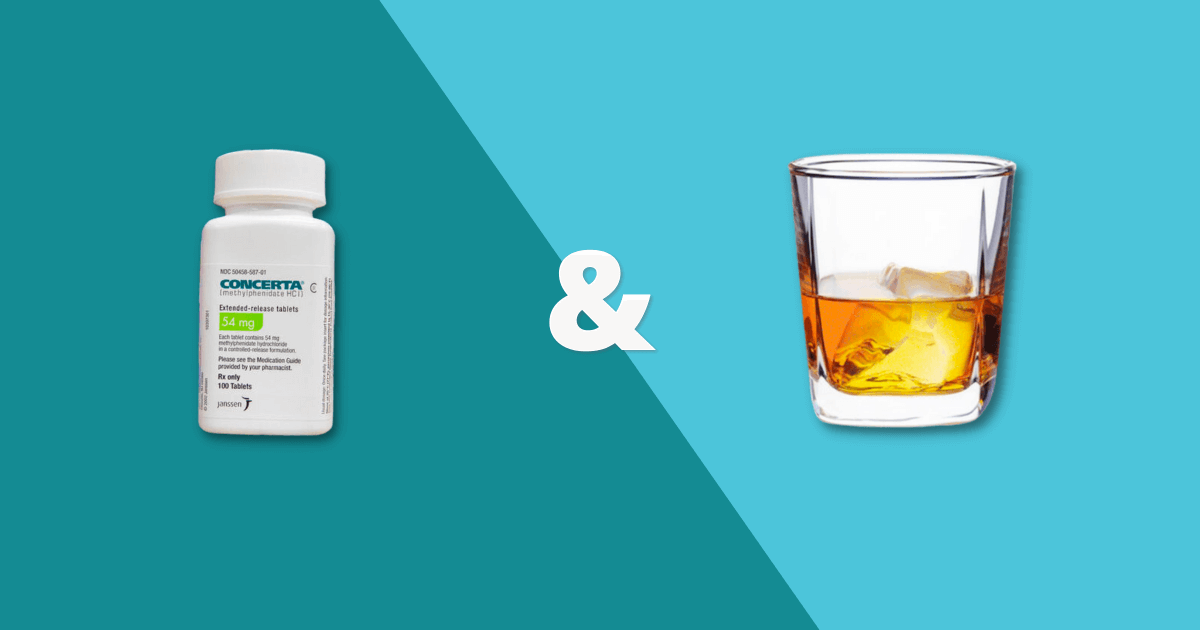 Research has shown there is a powerful link between attention deficit hyperactivity disorder (ADHD), alcohol abuse, and substance use disorders. In 2019 8.8% of US children were diagnosed with ADHD. Adult ADHD figures in the US are estimated to be 2.5% by The American Psychiatric Association. Concerta is a commonly prescribed stimulant drug used to treat ADHD. Medical advice is not to combine Concerta with alcohol. Read on to find out why.

Concerta is the brand name of an extended-release form of methylphenidate. Methylphenidate is a central nervous system (CNS) stimulant that is classified as a Schedule II controlled substance. It is a long-acting stimulant, therefore you only need to take Concerta once daily for symptom relief.

Concerta treats the symptoms of ADHD such as inattention, poor decision making, and poor impulse control. It can also be used for the treatment of narcolepsy. By working on the central nervous system, Concerta increases activity in areas of your brain that help with concentration and behavior. It works specifically on the brain neurotransmitters dopamine and norepinephrine. Dopamine in particular is involved in allowing you to feel pleasure, focus, and find things interesting. Other prescription drug stimulants include Adderall and Ritalin.

ADHD can be caused by your genes. Parents and siblings of ADHD children are on average 4-5 times more likely to have the disorder than the general population. Research shows there is a reduction in dopamine involved in some chemical pathways in the brain in ADHD patients. Dopamine is a chemical that influences our behavior, encouraging our brain cells to take certain actions.

How do we treat ADHD?

Treatment for ADHD is commonly arranged by a specialist in the psychiatry department. A prescription stimulant like Concerta is commonly started to treat symptoms. Non-medication treatment programs involving cognitive behavioral therapy and psychological counseling are also an option.

How does taking Concerta and drinking alcohol at the same time affect you?

Alcohol has the opposite effect as a stimulant like Concerta. It decreases central nervous system activity i.e. it is a depressant. Logic may make us think these drugs cancel each other’s effects. However, alcohol changes how your body processes ADHD medication when taken together, leading to adverse side effects.

Stimulants will mask the effects of alcohol, causing you to drink more than you would regularly, even leading to binge drinking or alcohol poisoning. While those struggling with ADHD may expect it to help them relax and tone down their hyperactivity, it often has the opposite effect. Additionally, alcohol’s effect on thinking, memory, and behavior is enhanced when a person has ADHD.

Mixing methylphenidate with alcohol can have a wide range of cognitive and physical effects:

The long term effects of taking Concerta with alcohol can include:

Why Are People With ADHD more likely to abuse substances?

Drug use and increased alcohol consumption are seen to be common behaviors used as a means of self-medication to help ease the symptoms of ADHD. In the short term, alcohol may solve your problems but this often leads to alcohol addiction causing a much greater issue. Teens and adults with ADHD often turn to substances during their teenage years.

Substance abuse allows sufferers to calm their thoughts so that they may better concentrate. They are more likely to overindulge in drugs or alcohol, without properly considering the consequences of doing so. Taking drugs and drinking alcohol may allow them to fit in with friends and colleagues.

Higher rates of comorbidities such as mental health conditions, alcohol dependence, and drug abuse are seen in people with ADHD. This normally develops in early adulthood. Approximately one-third of college students have abused stimulants like Concerta.

Inpatient alcohol detox and rehab is normally the first step in recovery. Symptoms of ADHD and alcohol withdrawal symptoms can be difficult to cope with without medical supervision, therefore many people seek an inpatient treatment facility. Outpatient care is also an option that requires extra support from your loved ones. Many interventions and treatment options can be put in place to help improve your quality of life. Group therapy with friends, family members, or others in the same position as you and cognitive behavioral therapy are to name a few.

If you are worried about yourself or a loved one some of the following resources may be of help to you – SAMHSA – Substance Abuse and Mental Health Service or The National Institute of Mental Health. SAMHSA also provides a helpline. Your doctor or healthcare provider can also help you make decisions about your addiction treatment and advise in choosing a treatment center.