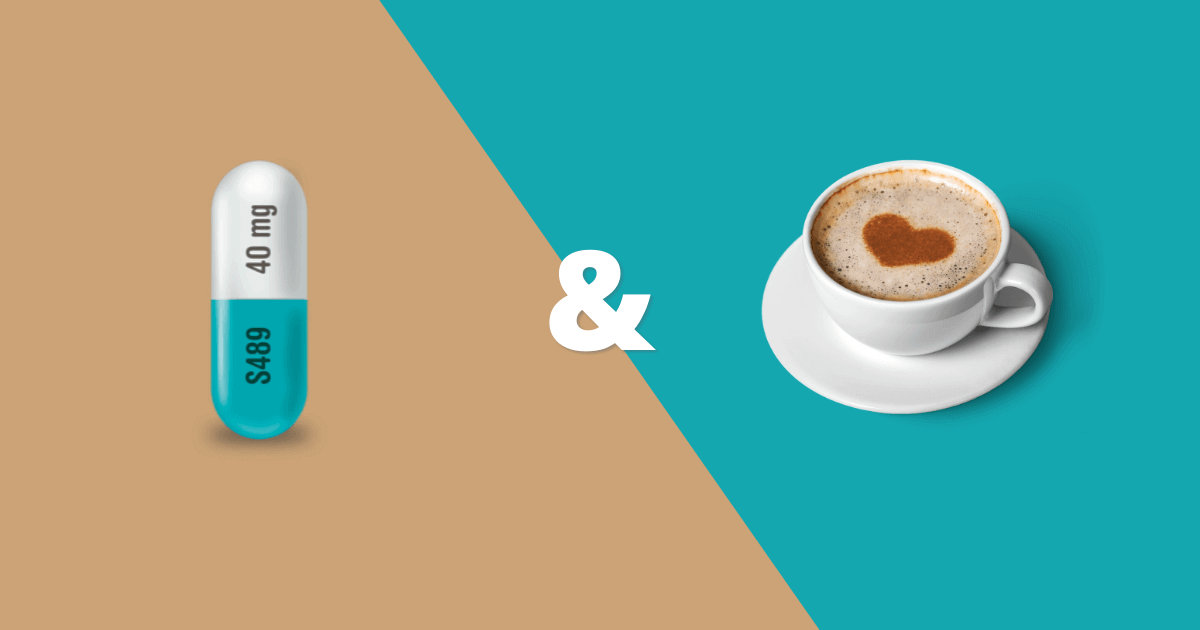 Vyvanse and coffee are both Central Nervous System stimulants, meaning that they increase mental and physical alertness and concentration in people. Vyvanse is a prescribed stimulant drug used to treat Attention Deficit Hyperactivity Disorder and coffee is a widely consumed stimulant that is available to pick up in a supermarket.

Many ADHD patients will be familiar with using coffee and energy drinks as a coping mechanism for dealing with ADHD. Is drinking coffee while on Vyvanse safe? No interactions are found between caffeine and Vyvanse however, this does not necessarily mean no interactions exist.

Vyvanse is the brand name of lisdexamfetamine dimesylate, an amphetamine, and also belongs to a class of drugs known as Central Nervous System stimulants (CNS stimulants). This means it acts on your brain to increase activity and speed up mental and physical processes.

It is used to treat symptoms of

As a prescription stimulant medication, Vyvanse also falls into the category of a Schedule II controlled substance. This means there is a high potential of abuse with this drug leading to severe psychological and physical dependence. The FDA highlights this risk alongside possible heart and mental health problems, which is more likely to occur when these stimulant medications are taken.

Neurotransmitters are produced naturally in your brain and body. They are signal molecules that allow messages to travel from nerve to nerve, regulating brain activity and playing a role in thinking and behavior.

Vyvanse causes your brain to release more neurotransmitters, like dopamine, norepinephrine, and serotonin and slows down the speed at which they are recycled. This causes levels of neurotransmitters to build up in your brain and improve ADHD symptoms.

How does coffee work in the body?

Coffee stimulates the body’s central nervous system and increases the brain’s production of a neurochemical known as dopamine, just as Vyvanse does. This stimulation can cause a person to feel alert and to have an increase in energy levels.

Negative effects can sometimes occur with caffeine. People who have trouble sleeping can experience further sleep disturbances or insomnia.

Side effects of caffeine

Heavy caffeine intake is defined by The Mayo Clinic as four or more cups of coffee per day which is roughly the equivalent of 500 to 600 mg. High doses of caffeine may cause:

The most common side effects of Vyvanse in children, adolescents, and/or adults with ADHD are:

As you can see the side effects of Vyvanse and caffeine are very similar. A person taking both amphetamines and caffeine will also get a double dose of their side effects. Both coffee and Vyvanse increase dopamine, and a person may begin to experience adverse side effects because of too much dopamine in the brain Both drugs can cause anxiety, difficulty sleeping, nausea, and stomach pains.

When caffeine and Vyvanse combine, they cause a synergistic effect. This happens when two drugs have additive mechanisms of action, making their combined effect more powerful. Caffeine makes amphetamines more effective, so a person taking Vyvanse, would likely feel a stronger impact depending on the amount of caffeine they consumed.

Caffeine and Vyvanse also act as vasoconstrictors. This means that they help in making the blood vessels smaller, which reduces the blood flow and helps in relieving headache symptoms. So, in this sense, both caffeine and Vyvanse have similar effects in controlling blood flow to treat ADHD. Caffeine has very similar properties to Vyvanse and how it treats ADHD.

If you want to drink coffee what can you do?

If you’re a real coffee lover, you could start with a small dose of coffee while on Vyvanse and see how your body responds. You can gradually increase the amount of coffee you drink while on Vyvanse, but it is highly recommended not to go overboard. Always consult your doctor.

Understanding how much caffeine is present in various drinks is useful if coffee is not something you can give up. Be mindful that the actual caffeine content of a cup of coffee can vary by brand. The Mayo Clinic gives these amounts as a guide:

Does decaf coffee mean it contains no caffeine?

We recommend you consult with your health care provider for advice regarding your child’s caffeine consumption.

Factors such as body weight, medications you may take, and individual sensitivity will determine how much coffee is too much for you. If you are taking Vyvanse for ADHD treatment and want to consume coffee then an easy swap may be to decaf coffee. However, if that’s not for you then speak to your prescribing healthcare provider for medical advice on how to consume coffee when taking an amphetamine such as Vyvanse, Adderall (amphetamine and dextroamphetamine), Concerta (methylphenidate ER), or Ritalin (methylphenidate). Always inform your pharmacist about any medications you are taking including over-the-counter meds and supplements.

Vyvanse is an expensive ADHD medication that is manufactured by Takeda Pharmaceuticals. It was initially approved b...