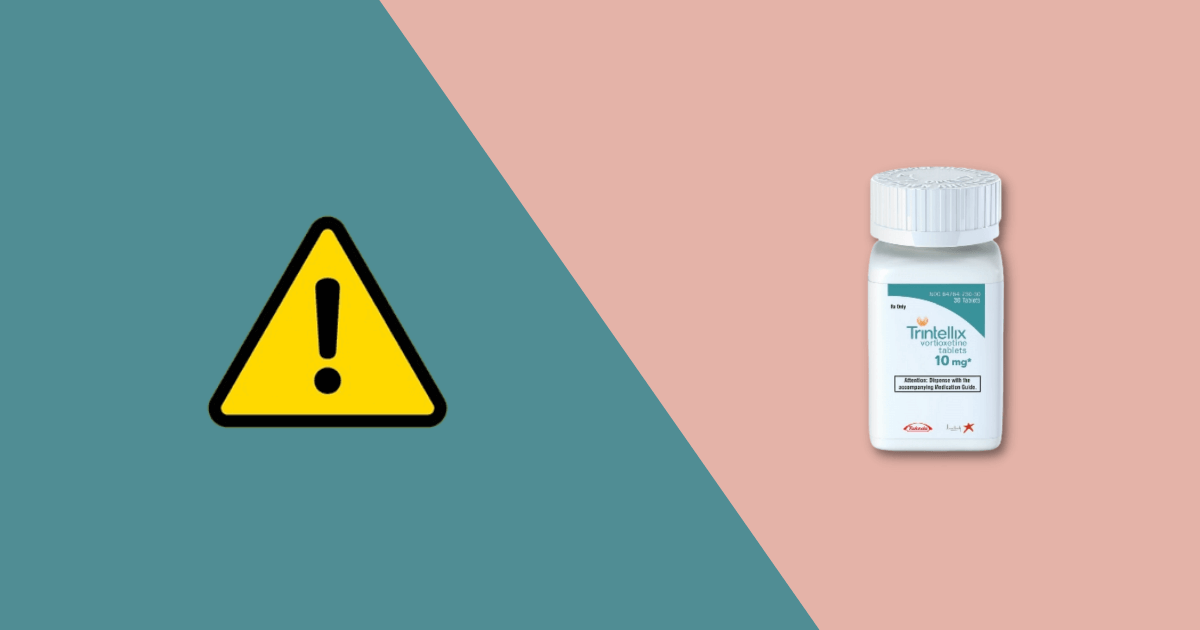 Trintellix is a brand-name drug manufactured by Takeda pharmaceuticals. It is a U.S. Food and Drug Administration (FDA) approved prescription medication used to treat depression symptoms in a type of depression known as Major Depressive Disorder (MDD). Trintellix works in a unique way that doesn’t fit neatly into other antidepressant classes but has effects similar to selective serotonin reuptake inhibitors (SSRI). Trintellix is only used to treat major depressive disorder. It is not used for the treatment of anxiety, attention deficit hyperactivity disorder (ADHD), obsessive-compulsive disorder (OCD), or bipolar disorder.

Trintellix can cause adverse effects like any other drug. Learn more about Trintellix side effects that often lead to discontinuation of treatment and how to avoid them.

Trintellix is an antidepressant prescribed to adults to treat Major depressive disorder (MDD). If you have MDD, your doctor may prescribe Trintellix to you, in addition to recommending other treatments. Trintellix works by increasing levels of a natural substance that regulates your brain activity called serotonin. This can reduce the severity of depressive episodes and help keep them at bay. You take Trintellix as an oral tablet that you swallow.

The active ingredient in Trintellix is called vortioxetine. It’s a type of antidepressant called a selective serotonin reuptake inhibitor (SSRI). When you swallow a Trintellix tablet, it releases vortioxetine into your bloodstream. Vortioxetine is then carried in your blood to your brain, where it slows down how quickly your brain cells reabsorb a substance called serotonin.

Serotonin is a neurotransmitter that helps regulate your brain function, particularly areas of your brain involved in mood, learning, and memory. Your brain cells reabsorb excess serotonin, but vortioxetine slows down how quickly this happens, causing serotonin levels to rise. This can rebalance your serotonin levels. Research has shown this can help to reduce the symptoms of depression.

The body uses serotonin in many different ways: to regulate mood, control bowel movements, control nausea, and regulate sleeping and waking, and is also involved in blood clotting, bone health, and mental health. This neurotransmitter plays an important role in the body.

Your doctor will advise you on your dosing regime. Each individual will be different and the dose will change from person to person. Some patients may begin with the 5 mg dose, others may take the higher dose. Always follow your doctor’s instructions and seek medical advice if you are unsure about dosing. The medication guide for Trintellix will be provided by your pharmacist before you start taking Trintellix.

Never stop your medication abruptly without consulting your doctor as withdrawal symptoms are possible. In clinical trials, some patients experienced discontinuation symptoms such as headache, muscle tension, mood swings, sudden outbursts of anger, dizziness, and a runny nose. This may occur in the first week of sudden discontinuation of Trintellix 15 mg daily or 20 mg daily.

Side effects of Trintellix

The most common side effects are:

Sometimes, Trintellix can cause more serious side effects. These include:

A boxed warning is the strongest warning that the FDA requires. These warnings alert doctors and patients about drug effects that may be dangerous.

Serotonin syndrome occurs when serotonin levels in the body are dangerously high. This can happen when Trintellix is taken alone or with other antidepressants such as sertraline, citalopram, paroxetine, fluoxetine and escitalopram, attention deficit hyperactivity disorder drugs, St. John’s wort, and others.

Symptoms of serotonin syndrome can include:

Trintellix did not significantly impact weight in short-term studies and during a 6-month phase of a long-term study of patients who responded to Trintellix when compared to patients taking a sugar pill. Some reports of weight gain have been received since product approval.

The results showed that sexual dysfunction occurred in 34% of females and 16% to 29% of males and 22% who took Trintellix during the clinical studies. They were more likely to happen when higher doses of the drug were taken.

Talk to your healthcare provider if you develop any changes in your sexual function or if you have any questions or concerns about sexual problems during treatment. Other alternatives are available.

When Trintellix is used with other medications that increase the risk of bleeding such as nonsteroidal anti-inflammatory drugs (NSAIDs), aspirin, or warfarin there is a serious bleeding risk. Nose bleeds, bleeding in the stomach or bleeding in the brain have the potential to occur.

Symptoms of serious bleeding can include:

Certain people and people older than 65 years of age, or those taking a diuretic medication, are more likely to have this side effect. Trintellix can cause low sodium levels.

Symptoms of low sodium can include:

Trintellix can interact with other medications, including:

Antidepressants can increase the risk of suicidal thoughts and suicide in children and young adults, particularly during the first few months of treatment. Trintellix is not for use in children, but young adults taking it should be monitored for signs of sudden changes in behavior, mood, thoughts, or feelings. Seek urgent medical attention if you, or someone you care for, feels they are at risk of suicide.

Don’t take Trintellix if you:

Talk to your doctor before taking Trintellix if you:

If you are pregnant or plan on becoming pregnant, it is best to speak with your healthcare provider before starting a medication.

Talk to your healthcare provider if you are breastfeeding or planning to breastfeed. It is unknown if this drug passes into breast milk.

Can you mix Trintellix and alcohol?

Trintellix’s prescribing information does not list alcohol as a contraindication or warning but is strongly discouraged by healthcare professionals. Trintellix can worsen the effects of alcohol, while alcohol can worsen the side effects of Trintellix. When you have depression, you have an increased risk of developing a substance use disorder. Therefore mixing antidepressants with alcohol can lead to alcohol abuse, increasing the potential to become alcohol dependent. If you drink and develop an addiction to alcohol, it will become more difficult for you to control your symptoms of depression and get your alcohol consumption under control. You may need more frequent and long-term treatment if you have both an alcohol use disorder and depression.

The combination of alcohol and antidepressants can be very challenging if someone is drinking, binge drinking, heavy drinking, or has an alcohol use disorder prior to taking antidepressants. Furthermore, if someone decides to stop taking drugs for depression and starts drinking alcohol for symptom management instead, they can worsen their symptoms of depression, in some cases leading to suicidal thoughts.

How to avoid Trintellix side effects

1. Stick to the recommended dosage

Take your prescribed dose that has been recommended by your healthcare professional once daily at the same time each day with water. Taking your medication consistently will make a big difference in how well Trintellix works for you.

Your healthcare provider may adjust your dose of Trintellix or your other medications to find the best dosage for your specific needs.

Discussing your medical history with your healthcare provider is important to help them understand how well Trintellix will work for you. Give a complete list of all the prescription drugs, including over-the-counter meds, supplements especially St. John’s wort and tryptophan, and health conditions you may have. Talking with your doctor will allow them to pick up any drug interactions with Trintellix and help manage any possible side effects.

Although alcohol doesn’t interact directly with Trintellix, mixing Trintellix and alcohol together is strongly discouraged by healthcare professionals. Both work on slowing down the central nervous system causing drowsiness, sedation, and impairment. When taken together however they can create health problems for you, impact your mental health further, cause challenges in your home life with loved ones, and other serious concerns.

If you are planning to drink alcohol and you have Major depressive disorder, aim to always stay within the recommended guidelines. This is the safest way to drink alcohol.

4. Pay attention to your body

Paying attention to how your body feels when taking Trintellix is important. If you or loved ones around you see new or sudden changes in your mood, behavior, thoughts or feelings, or symptoms that are new or worsening, or if you develop suicidal thoughts or actions get emergency help right away.

Talk to your doctor straight away if you start to experience any side effects of Trintellix when taking it, or if you feel the medication is not working for you. There are many other treatment options available.

Managing depression with drugs is one way to keep symptoms under control. Another way to keep yourself mentally healthy is to:

Store the medicine in a closed container at room temperature, away from heat, moisture, and direct light. Do not store it in the bathroom.

Knowing how to store your medication is important to make sure it remains as effective as possible. Using expired or improperly stored medication could result in the medication not working properly and even causing unwanted side effects.