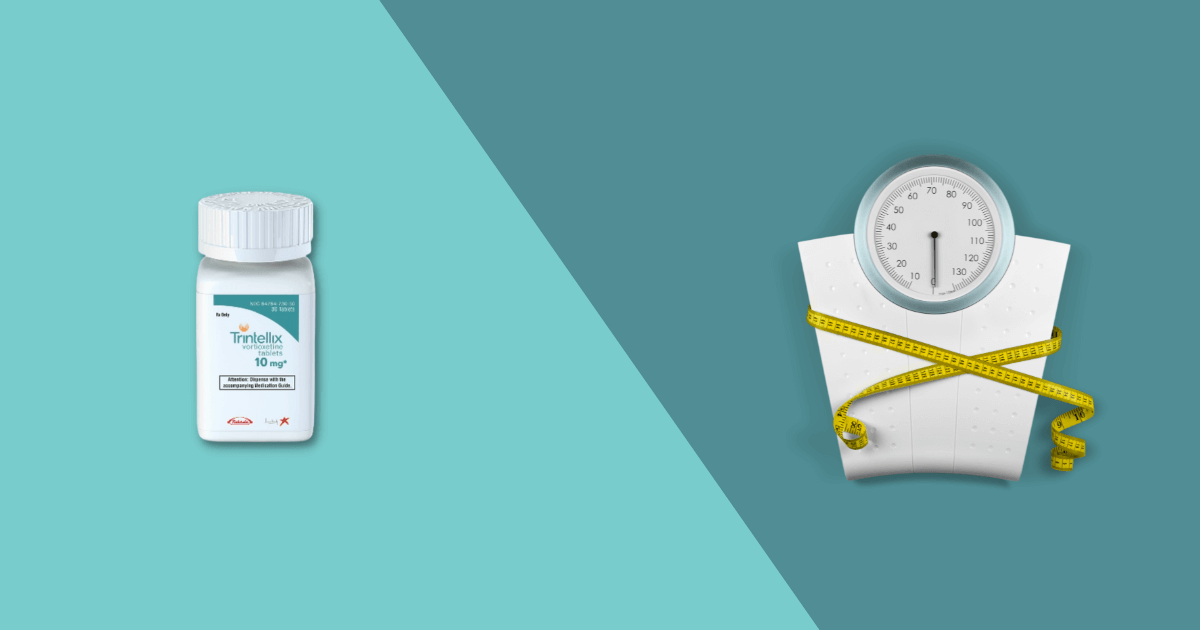 More than 1 in 10 Americans take antidepressant drugs to treat depression. Like all medications, antidepressants such as Trintellix have side effects that can affect some, but not all people.

Weight gain is a possible side effect of many antidepressants. Weight change (weight gain or weight loss) is common in people with depression and other mood disorders even if they are not taking an antidepressant.

Keep reading as we discuss Trintellix and what effect it can have on your weight.

What is Trintellix (vortioxetine)?

Trintellix is an antidepressant medication that can be considered a serotonin modulator and stimulator. Trintellix was previously marketed under the brand name Brintellix but the manufacturer changed the name in 2016 after there was confusion between Brintellix and a prescription medication for the heart called Brilinta. Trintellix is FDA-approved to treat major depressive disorder (MDD) in adults.

The exact mechanism of action of Trintellix in the treatment of depression is not known but is thought to be due to its serotonergic activity and inhibition of the serotonin transporter, a mechanism similar to the selective serotonin reuptake inhibitors (SSRIs) such as Celexa (citalopram), Lexapro (escitalopram), Zoloft (sertraline), and Prozac (fluoxetine).

Trintellix is an oral tablet that is typically taken once a day. It is available in strengths of 5mg, 10mg, and 20 mg.

RELATED: What is Trintellix

According to the drug manufacturer, Trintellix did not cause any significant change in body weight during short-term clinical studies or during a 6-month phase of a long-term study of patients who responded to Trintellix when compared to patients taking a placebo. However, since it has come out on the market, there have been reports of weight gain. It should be noted that it is unclear how often this occurs or if Trintellix was the cause of the weight gain.

If Trintellix is the cause, it may be due to Trintellix increasing your appetite or because it has altered your hormones or metabolism. Weight gain seems to be a rare occurrence with Trintellix, especially when compared to these other medications used to treat depressive symptoms due to mental health disorders, including:

Other antidepressants that have been associated with less weight gain than those mentioned above, include Trintellix as well as:

Depression itself can make gain weight by causing you to overeat, make poor diet choices, and keep you unmotivated to exercise. Depression can cause some people to have a decreased appetite, leading to weight loss. Starting an antidepressant can help improve your mood which can increase your appetite and result in weight gain.

Adults typically gain weight as they age, no matter what medications they are taking. Weight gain could also be due to bloating, constipation, or social eating.

What are the pros and cons of Trintellix?

If your prescribing physician has given you Trintellix to treat your depression, it is important to weigh the pros and cons of using this medication.

How do you take Trintellix?

What should you tell your doctor before starting Trintellix?

Before taking Trintellix, be sure your doctor is aware of all your medical conditions, including:

What are the most common side effects of Trintellix?

The most common side effects of Trintellix seen in clinical trials include:

Trintellix can sometimes cause serious side effects such as:

Speak with your healthcare provider about the possible drug interactions with any other prescription drugs, over-the-counter products, vitamins, and supplements you are taking. These are not all of the possible side effects of Trintellix. You should always seek medical advice for any questions or concerns relating to your medical condition or treatment. You can report side effects to FDA at 1-800-FDA-1088 or www.fda.gov/medwatch.

RELATED: Trintellix side effects and how to avoid them

How much does Trintellix cost?

The estimated cost for #30 Trintellix 10mg tablets (30-day supply) is over $525 without insurance.

Brand-name medications such as Trintellix are typically more expensive because of the high costs to develop, market, and sell brand-new drugs. The drug companies that develop new medications will have a patent on them. This gives them the exclusive right to sell that medication. With no competition from generics, drug companies charge whatever the market will allow, maximizing their profits. The patents for Trintellix will expire in June 2027, which is the earliest date a generic pharmaceutical company will be able to apply for FDA authorization to sell a generic version of Trintellix.

RELATED: Why is Trintellix so expensive?

How long does it take Trintellix to work?

In short-term studies that lasted 6 to 8 weeks, patients started seeing the therapeutic effect of Trintellix in week 2 of treatment. The full effects of Trintellix are not typically seen until week 4 or later.

Does Trintellix make you retain water?

For some people who take Trintellix, it can cause them to have low sodium levels in their blood. Low sodium levels may be due to them retaining water and diluting the concentration of sodium. For those on Trintellix, it is typically due to fluid retention caused by the syndrome of inappropriate antidiuretic hormone secretion (SIADH). Elderly patients over the age of 65 and those taking diuretics are at an increased risk of this side effect.

Trintellix is a brand-name drug manufactured by Takeda pharmaceuticals. It is a U.S. Food and Drug Administration (...

Trintellix and Lexapro are brand names for prescription drugs used for the treatment of mental health disorders s...

Trintellix and Zoloft are brand names for prescription drugs used to treat depression and other mental health diso...

Get your Trintellix medication for only $49 per month through NiceRx.