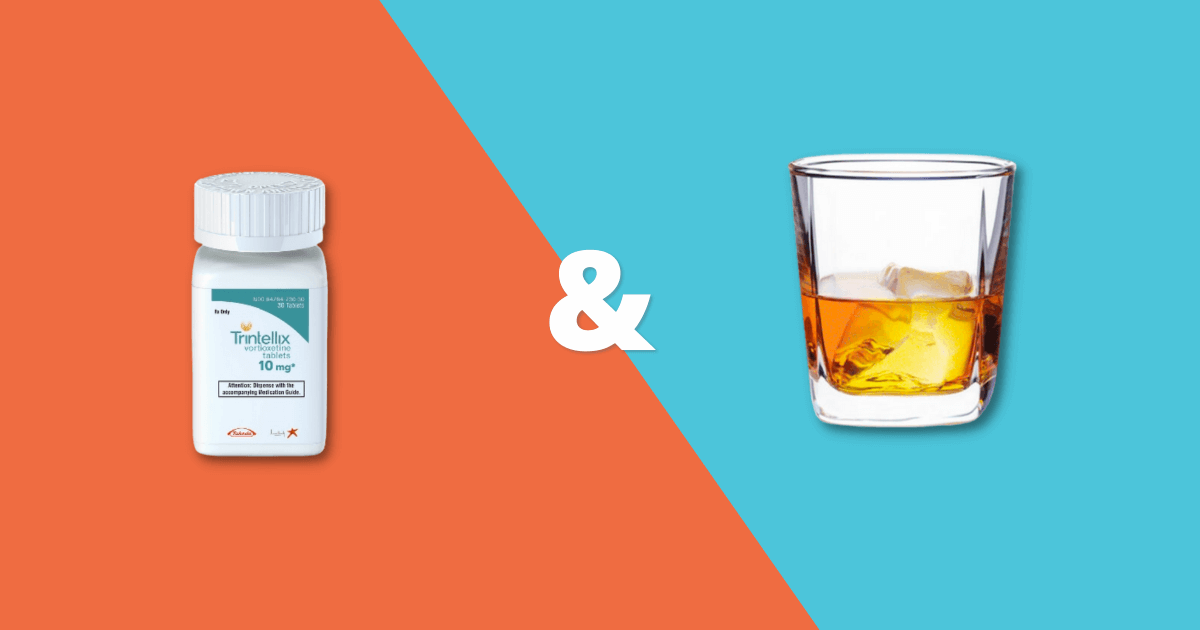 Trintellix is a brand-name drug containing the active drug vortioxetine. It is an FDA-approved prescription medication used to treat the symptoms of a type of depression known as Major Depressive Disorder (MDD). Trintellix works in a unique way that doesn’t fit neatly into other antidepressant classes but has effects similar to selective serotonin reuptake inhibitors (SSRI). Trintellix is only used to treat major depressive disorder. It is not used to treat anxiety, attention deficit hyperactivity disorder (ADHD), obsessive-compulsive disorder (OCD), or bipolar disorder.

Taking Trintellix and drinking alcohol together is strongly discouraged by healthcare professionals. Both work on slowing down the central nervous system causing drowsiness, sedation, and impairment. When taken together however they can create health problems for you, impact your mental health further, cause challenges in your home life with loved ones, and other serious concerns. In the US, 13.8 million people received treatment for depression in 2020. Due to how commonly they’re used people tend to forget that antidepressants can have dangerous side effects and interactions with alcohol. Read on to find out how drinking alcohol can make symptoms of depression more severe and harder to treat when taking Trintellix.

What are the different types of antidepressants?

There are various classes of antidepressant medication. Below are the main ones:

SNRIs, work in a similar way to SSRIs. This type of antidepressant stops the brain from removing both the serotonin and norepinephrine that are released naturally. Norepinephrine enhances awareness and focus as well as allowing the brain to create and recall memories. SNRIs create a surplus of this chemical to help combat the fuzzy, distant feelings often associated with depression. Common SNRIs include, Cymbalta (duloxetine), Effexor (venlafaxine) and Pristiq (desvenlafaxine).

Certain alcoholic beverages contain a substance called tyramine that can cause serious side effects if consumed while on an MAOI. Side effects include a sudden dangerous increase in blood pressure. Doctors will advise you against alcohol use if you are taking an MAOI. Tyramine is also found in certain foods, so your healthcare provider will give you advice on which foods to avoid. Excessive tyramine in the body can also cause dangerously high blood pressure. Marplan (isocarboxazid), Nardil (phenelzine), and Emsam (selegiline) are commonly prescribed MAOIs. You should not use (MAOIs) with Trintellix.

TCAs show their greatest side effects during the first few weeks of treatment. At this point, it is not a good idea to consume alcohol. A few weeks after side effects have passed it’s generally considered safe to drink small amounts of alcohol but still not advised. Elavil (amitriptyline), Silenor (doxepin), and Pamelor (nortriptyline) are commonly prescribed TCAs.

Drugs in this category include Wellbutrin SR and XL (bupropion).

How does Trintellix work?

It is thought Trintellix works by correcting the imbalance of serotonin. Serotonin is a neurotransmitter in the brain. Low levels of serotonin may be linked to symptoms of depression.

What are the side effects of Trintellix?

Common side effects of Trintellix include:

Mild side effects that have been reported with this drug include:

Serious side effects that have been reported with Trintellix include:

To minimize drug interactions and worsening of possible side effects you must inform your health care professional of other medical conditions you are taking prescription drugs to treat, over-the-counter medications or supplements such as St.John’s Wort. If you are breastfeeding and taking Trintellix, talk with your doctor about the potential risks and benefits. This article is not medical advice therefore always speak to your doctor about your health conditions.

Get your Trintellix medication for only $49 per month

Can you mix Trintellix and alcohol?

Trintellix’s prescribing information does not list alcohol as a contraindication or warning but is strongly discouraged by healthcare professionals. Trintellix can worsen the effects of alcohol, while alcohol can worsen the side effects of Trintellix. When you have depression, you have an increased risk of developing a substance use disorder. Therefore mixing antidepressants with alcohol can lead to alcohol abuse, increasing the potential to become alcohol dependent. If you drink and develop an addiction to alcohol, it will become more difficult for you to control your symptoms of depression and get your alcohol consumption under control. You may need more frequent and long-term treatment if you have both an alcohol use disorder and depression.

The combination of alcohol and antidepressants can be very challenging if someone is drinking, binge drinking, heavy drinking, or has an alcohol use disorder prior to taking antidepressants. Furthermore, if someone decides to stop taking drugs for depression and starts drinking alcohol for symptom management instead, they can worsen their symptoms of depression, in some cases leading to suicidal thoughts.

Taking antidepressants and drinking alcohol together are strongly discouraged by healthcare professionals. Both wor...

Trintellix is a brand-name drug manufactured by Takeda pharmaceuticals. It is a U.S. Food and Drug Administration (...

Get your Trintellix medication for only $49 per month through NiceRx.