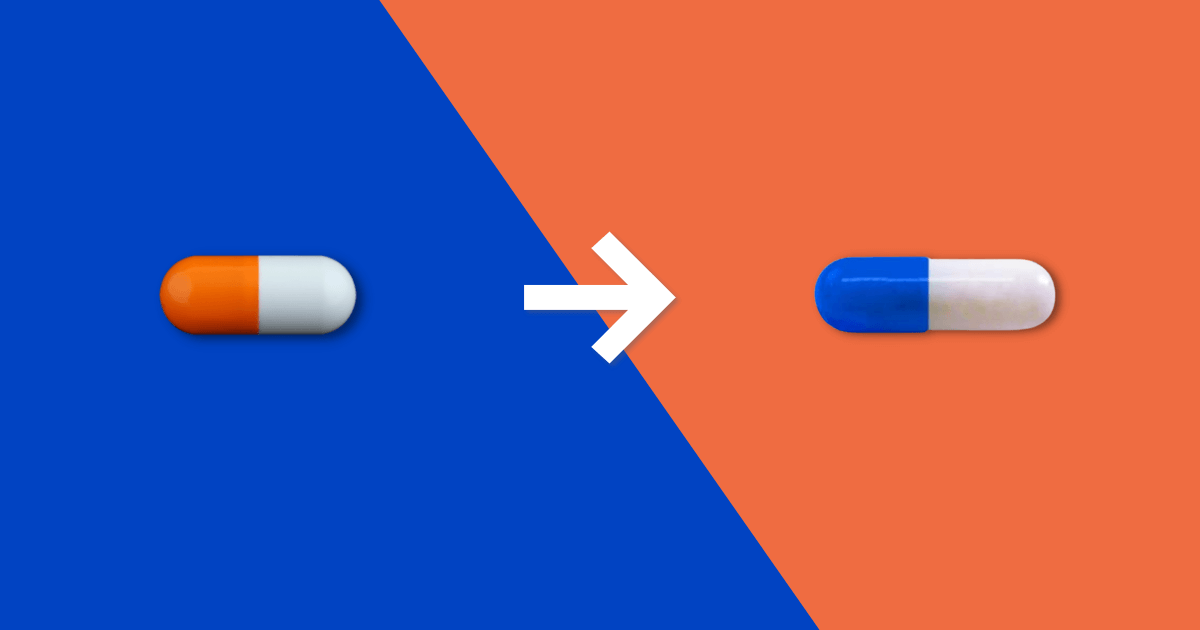 Patients receiving treatment for attention deficit hyperactivity disorder (ADHD) often need to change their medication. Switching medication is often recommended by healthcare professionals when ADHD symptoms are not controlled or there are unacceptable adverse effects. There are many ADHD medication treatment options to consider. How and when to switch medications should be done under your doctor’s medical advice and guidance. Several questions arise when changing medications and this blog will focus on switching from Adderall to Vyvanse.

Adderall contains mixed amphetamine salts and is available in two formulations: Adderall IR (immediate-release) is short-acting and Adderall XR (extended-release) is long-acting. We will focus on Adderall IR in this blog.

Adderall IR is indicated for the treatment of:

Vyvanse is an FDA (U.S. Food and Drug Administration) approved medication manufactured by Shire PLC. Vyvanse is the brand name of lisdexamfetamine dimesylate, a derivative of amphetamine. Vyvanse contains the prodrug lisdexamfetamine, which is metabolized into L- lysine, and dextroamphetamine once it is in the body.

It is a prescription drug belonging to a class of drugs known as Central Nervous System stimulants.

Vyvanse is used to treat:

Other drugs included in the class of Central Nervous System stimulants include Concerta (methylphenidate), and Ritalin.

How do Adderall and Vyvanse work in the body?

Adderall and Vyvanse belong to a class of drugs known as amphetamines. By working on the central nervous system Adderall and Vyvanse increase activity in areas of the brain that help you with your concentration and behavior. They work specifically on the chemicals dopamine and norepinephrine in the brain. These neurotransmitters, dopamine, in particular, are involved in feelings of pleasure, focus, and finding things interesting. Stimulant medications reduce the symptoms of ADHD making conditions such as inattention, poor decision making, and poor impulse control much less of a daily problem.

One important difference is that Vyvanse is a prodrug, meaning lisdexamfetamine is converted into dextroamphetamine once it is in the body. Vyvanse remains inactive until the body breaks it down in the bloodstream. This is not the case with Adderall.

It is important to remember these timings are rough estimates because several factors need to be taken into consideration such as drug tolerance, weight, height, and sleep patterns to name a few.

Forms and dosages of Vyvanse

How long does it take for Adderall to work?

It will take Adderall around 30 minutes to 1 hour to start working in your body, therefore having a faster absorption rate than Vyvanse. You can experience increased energy and focus quicker, which may be useful if you need immediate relief from ADHD symptoms. Just like Vyvanse, these duration times are just approximate.

Forms and dosages of Adderall

Although the two medications are similar and work in a similar way, they contain different active ingredients. Adderall contains four different kinds of amphetamine salts, whereas Vyvanse only contains lisdexamfetamine, which is converted to dextroamphetamine inside your body.

Both Vyvanse and Adderall are effective treatments for ADHD, and they both cause similar side effects. Vyvanse only has an effect once it’s been converted into your body. It’s thought to have a lower risk of substance abuse than Adderall because it’s manufactured to have a slower rate of chemical release and requires enzymes in your body to convert it into its active form.

Vyvanse metabolizes slowly, allowing it to work longer than Adderall. Adderall metabolizes quickly and is absorbed through the gastrointestinal tract. Differences are seen in the onset of action time. Vyvanse takes around 1 to 3 hours to work depending on the formulation and its effects last up to 14 hours when taken once daily. Adderall is normally prescribed twice daily, it takes about 30 minutes to 1 hour to work, and its effects last 4 to 5 hours.

When is it recommended to switch From Adderall to Vyvanse?

Stimulants are powerful medications that wear off rapidly. They’re also completely eliminated from your body by the end of their specified duration, so it’s possible to stop taking them one day and start another stimulant on another occasion. Your doctor will tell you how this transition should be made when changing from Adderall to Vyvanse.

Are Adderall and Vyvanse safe to use?

Lisdexamfetamine is converted in your body into dextroamphetamine, which is an amphetamine. Amphetamines can be used as a recreational drug. This is where they aren’t used as prescribed or to treat an indicated medical condition.

Recreational use, particularly heavy use of amphetamines, can lead to physical dependence (addiction). It can alter the way your body works. You can also become more tolerant of them, requiring higher doses to get the desired effect.

Vyvanse has less potential to be used recreationally than other amphetamines, as it’s slower acting, and won’t be absorbed quicker if it’s crushed or ground up. If used as directed by a doctor to treat ADHD or BED, it shouldn’t become addictive. Research has also shown that long-term use of stimulants from childhood to treat conditions like ADHD reduces the chances of addiction. Your healthcare provider should assess your risk of Vyvanse addiction before prescribing and should monitor you while you take it.

Adderall in contrast has more potential to be addictive as it is faster acting than Vyvanse and will be absorbed quicker. Because it works quickly when crushed up and used it may have a higher potential for misuse.

Vyvanse and Adderall are Schedule II drugs, which means there is a potential for abuse and dependency. Since Vyvanse needs to be converted in the body, it can’t be inhaled or injected as a way to become high, so it is less likely to be misused than Adderall and other stimulant medications. Always store your medications safely and away from other people.

Adderall and Vyvanse side effects

The most common side effects of Adderall and Vyvanse in children, adolescents, and/or adults with ADHD are:

In rare instances, Adderall and Vyvanse can cause more serious side effects. These can include:

Your doctor will assess the benefits of using Adderall and Vyvanse against your risk of side effects. You are encouraged to report negative side effects or adverse reactions of Vyvanse to the FDA. Visit www.fda.gov/medwatch, or call 1-800-FDA-1088.

Read the full prescribing information for Adderall and Vyvanse and always speak with your healthcare provider for medical advice about your medicine so they can monitor and evaluate your condition. Always inform your healthcare provider of all your medical conditions, and any medications you are taking, including over-the-counter meds and supplements.

Vyvanse and Adderall are two of the most commonly prescribed ADHD meds. While they both work to relieve symptoms, it may take trial and error to find what works best for you.