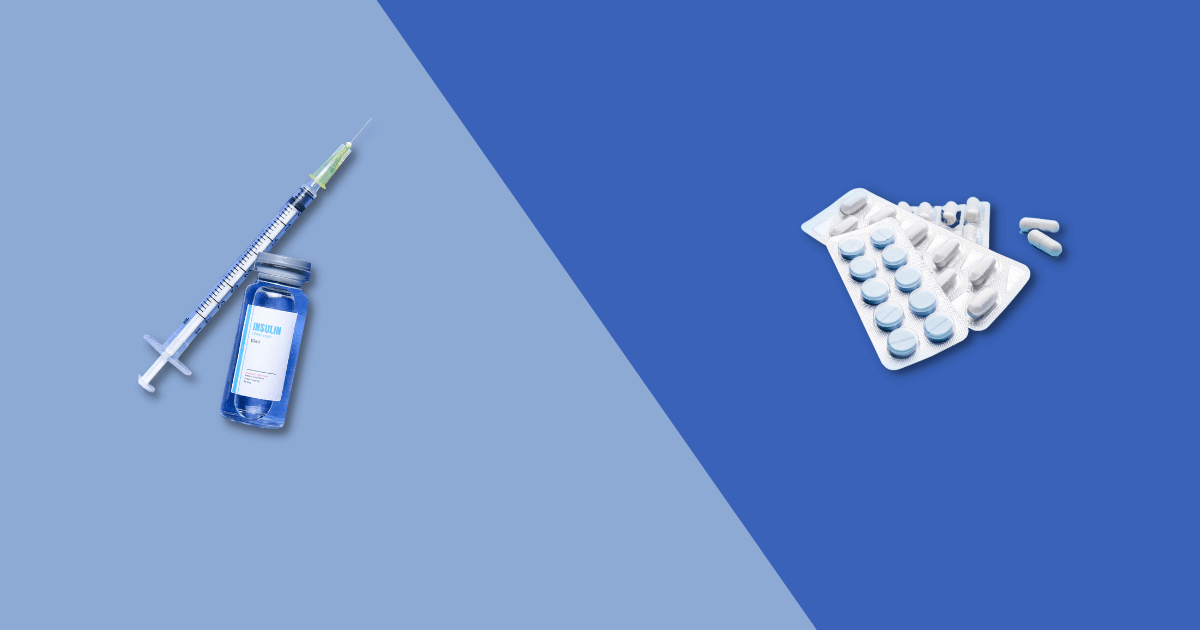 Most popular in Diabetes

What foods to avoid with diabetes

Having a good grasp of the medication you are taking and how it works gives you more confidence in managing your diabetes. The number of medications available to treat type 2 diabetes in particular, is long and confusing at first. No single diabetes treatment is best for everyone and what works for one person may not work for another. Let us take a look at the various diabetes medications available, simplify how they work, and what common side effects they may have. This knowledge will allow you to discuss treatment options available with your doctor.

When you have type 1 diabetes the only choice of medication is insulin. If you have type 2 diabetes you may use insulin injections if diet and tablets are not working for you.

There are different types of insulin but the basic difference is in how quickly they take effect, so they can be divided into:

An amylinomimetic drug called pramlintide can be used as an injection before meals. It works as follows:

Symlin Pen is the brand available.

This class of drug is one of the earliest medications for diabetes. Biguanides such as metformin are used regularly as a first-line treatment for type 2 diabetes and are the most common medication used for diabetics. It is unsuitable for anyone with liver, kidney, or heart problems.

How do Biguanides work?

The most common side effects caused by Biguanides include:

The most common side effects caused by Meglitinides include:

How do Sulfonylureas work?

The most common side effects caused by Sulfonylureas:

As with insulin, Sulfonylureas can be classed as short, medium, or long-acting depending on how fast they work.

How do Glinides work?

How do Thiazolidinediones work?

The most common side effects caused by Thiazolidinediones include:

How do Alpha-glucosidase inhibitors work?

The most common side effects caused by Alpha-glucosidase inhibitors include:

How do Dopamine agonists work?

The most common side effects caused by Dopamine agonists include:

How do Dipeptidyl peptidase-4 work?

The most common side effects caused by DPP-4 inhibitors include:

How does it work?

How do Amylin mimetics work?

How do SGLT2 inhibitors work?

The most common side effects caused by SGLT2 inhibitors include:

How do Bile sequestrants work?

Over time as a type 2 diabetic, your medication will change as your diabetes progresses. You may require multiple medications to keep your blood sugar level stable and within the safe range. Combination oral pills combine the effects of two medications in one drug.

Diabetes is much more than just blood glucose levels e.g type 2 diabetics have a higher risk of heart attacks and strokes, therefore medications to control blood pressure and cholesterol are very useful.

Here are some of the most widely used medications:

What is the latest drug for diabetes?

The three latest drugs for diabetes are:

What is the safest drug for diabetes?

There is no evidence to suggest that one diabetes drug is safer than another.

What is the cheapest diabetic medicine?

Why are doctors not prescribing metformin anymore?

In June 2020, metformin extended-release tablets were recalled because of higher levels of NDNA (n-nitrosodimethylamine) than acceptable by the FDA. The FDA advises that you should continue to take extended-release metformin until your doctor or pharmacist gives you an alternative.

Aspirin has proven to be an effective treatment for people with diabetes. The drug works on the platelets in your blood, reducing the risk of cardiovascular events. Since people with diabetes are two to four times more likely to develop cardiovascular problems, aspirin is commonly prescribed daily. Since 1997 the American Diabetes Association has recommended aspirin for diabetics. However, aspirin use in diabetics under 30 years of age has not been studied, and taking aspirin by diabetics under 21 years of age is not recommended.

Is there an insulin pill for diabetes?

Currently, the answer is no but there are drugs that are in early development to offer patients an alternative to injecting insulin. Several pharmaceutical companies are racing to be the first to launch insulin pills.

Do I need insulin with type 2 diabetes?

Type 2 diabetes can be treated in the first instance with diet and lifestyle changes, followed by oral medication if needed. However, most type 2 diabetics will eventually need to take insulin by injection. It is important to remember that type 2 diabetes is a progressive disease and medication changes will occur over the years.

Diabetes insipidus is not related to diabetes mellitus (type 1 diabetes or type 2 diabetes) despite the name. Dia...

Can you reverse diabetes?

Diabetes is a lifelong condition that can be significantly improved but not cured. You can reverse diabetes symptom...

Insulin pumps are part of the rapid progression in diabetes management. In 2019 a review found over 350,000 people...

Insulin is your best friend if you have type 1 diabetes. If you are a type 2 diabetic you may need insulin later in...

How to lower blood sugar fast

High blood sugar, also known as hyperglycemia, can happen if you are a diabetic for many different reasons, includi...

What is the difference between type 1 and type 2 diabetes? You may already know that more than one form of diabetes...

According to the American Diabetes Association self-monitoring of blood glucose is the key to diabetes management. ...

Diabetes is a group of diseases that cause your blood glucose levels to rise too high, harming your health. A range...

What are normal blood glucose levels?

Normal blood glucose levels for adults without diabetes are 90 to 110 mg/dL. Learn more about the symptoms of low a...