Complete a free online enrollment application to find out if you’re eligible to pay only $49 per month for your Insulin medication.

What is Insulin Uses, warnings & interactions

Complete a free online enrollment application to find out if you’re eligible to pay only $49 per month for your Insulin medication.

Insulin is a hormone that your body makes naturally. It’s produced by beta cells in your pancreas, a small organ found behind your stomach. Your pancreas secretes the insulin it makes into your bloodstream.

What does insulin do?

Insulin has two main functions, both of which help you to maintain a healthy blood sugar level.

When you digest food and drink, a type of sugar called glucose is released into your blood. The glucose is taken around your body in your bloodstream so it can be delivered to the cells that use it for energy. Insulin in your blood helps your cells absorb glucose. Insulin molecules attach to the surface of your cells, triggering them to bring glucose transporting proteins to the surface, which bring glucose into the cell.

If you have more glucose in your blood than your cells need, insulin also signals your liver to absorb and store the excess glucose, so it can be used later when your blood glucose has fallen.

Diabetes is a group of diseases that cause you to have too much glucose in your blood for long periods. The two most common forms of diabetes are called type 1 and type 2 diabetes.

With type 2 diabetes, your cells become resistant to insulin, meaning the insulin you produce doesn’t work as well. Your pancreas may also stop producing as much insulin as it should. Both of these cause your cells to absorb less glucose than they should, causing your blood glucose to be too high.

High blood glucose can make you feel hungry, thirsty, and tired, but over time it can cause or contribute to more serious health problems. These can include nerve damage, kidney failure, heart disease, strokes, vision loss, and it can lead to the amputation of parts of your body.

What is insulin resistance?

Insulin for the treatment of diabetes

How does insulin work?

You take insulin by injecting it under your skin (subcutaneous injection). The injected insulin is then absorbed into your bloodstream and works in the same way as the insulin your pancreas produces. It attaches to the surface of your cells, triggering them to absorb glucose, as well as causing your liver to store excess glucose.

The only important difference between the insulin produced by your pancreas and the insulin you inject is that the injected insulin is sometimes made to be faster acting or longer acting than natural insulin (see Types of Insulin below for more of this).

How effective is insulin for diabetes?

Insulin is a safe and effective treatment for most people with diabetes. If your pancreas isn’t producing enough insulin, or you’ve developed insulin resistance, insulin injections can help your cells absorb more glucose and lower your blood glucose levels. Insulin may be the only medication you need to treat your diabetes, but in some cases, it’s used alongside other treatments, particularly for type 2 diabetes.

There are many different brands and different types of insulin. They all work in the same way as natural insulin, but they’ve been designed to affect you at different speeds and to last for different lengths of time. Faster acting insulin is usually used after a meal to help absorb the glucose released, whereas longer-acting insulin is used to help lower your blood glucose throughout a whole day.

Broadly, you can group insulin brands into five types: 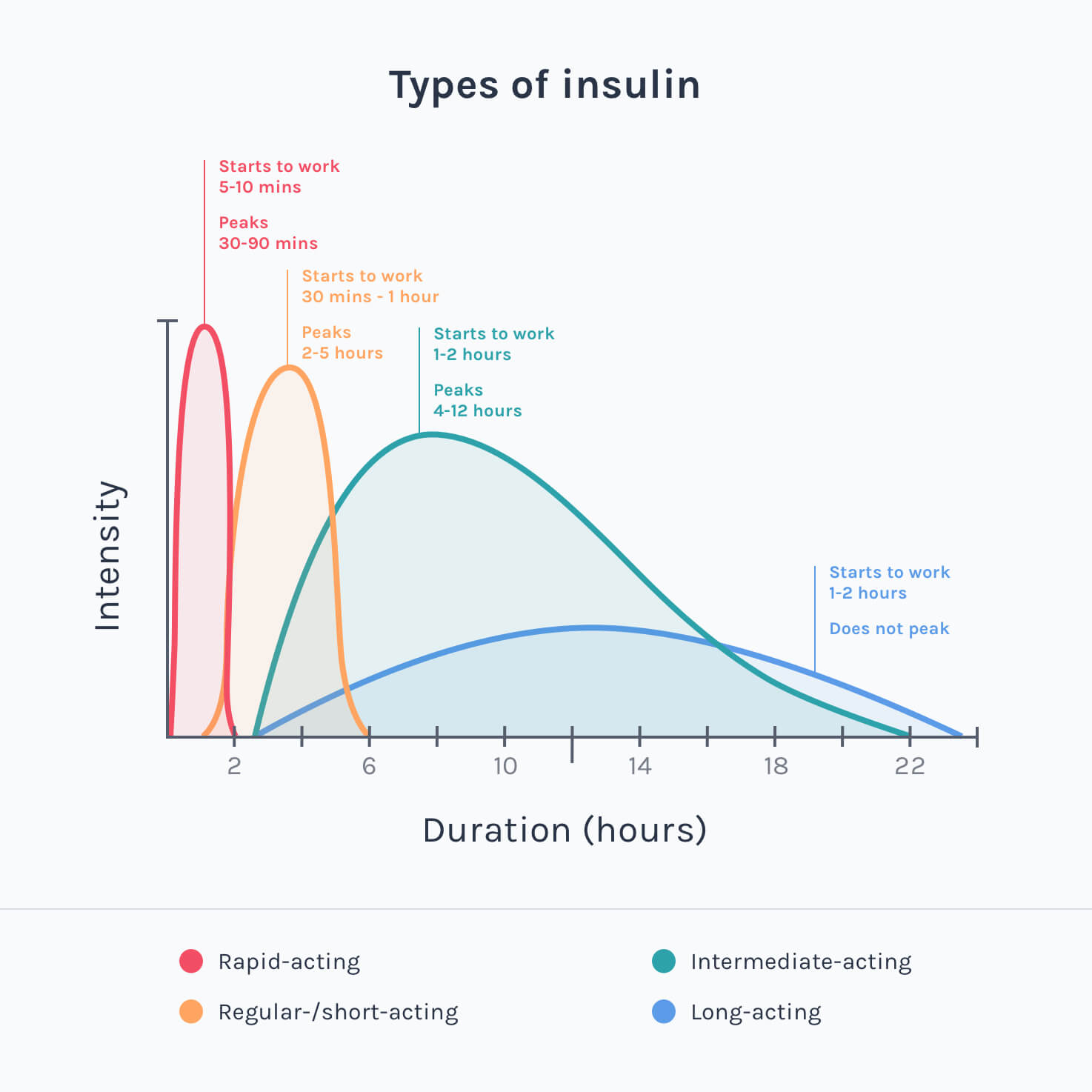 How to take insulin

You take insulin by injecting it under your skin (subcutaneous injection), usually in your stomach, thighs, buttocks, or upper arms. You can do this using either a syringe or a self-injecting pen device, depending on which one you’re more comfortable with. Your doctor or a diabetes educator can show you how to inject insulin or how to use an insulin pen. 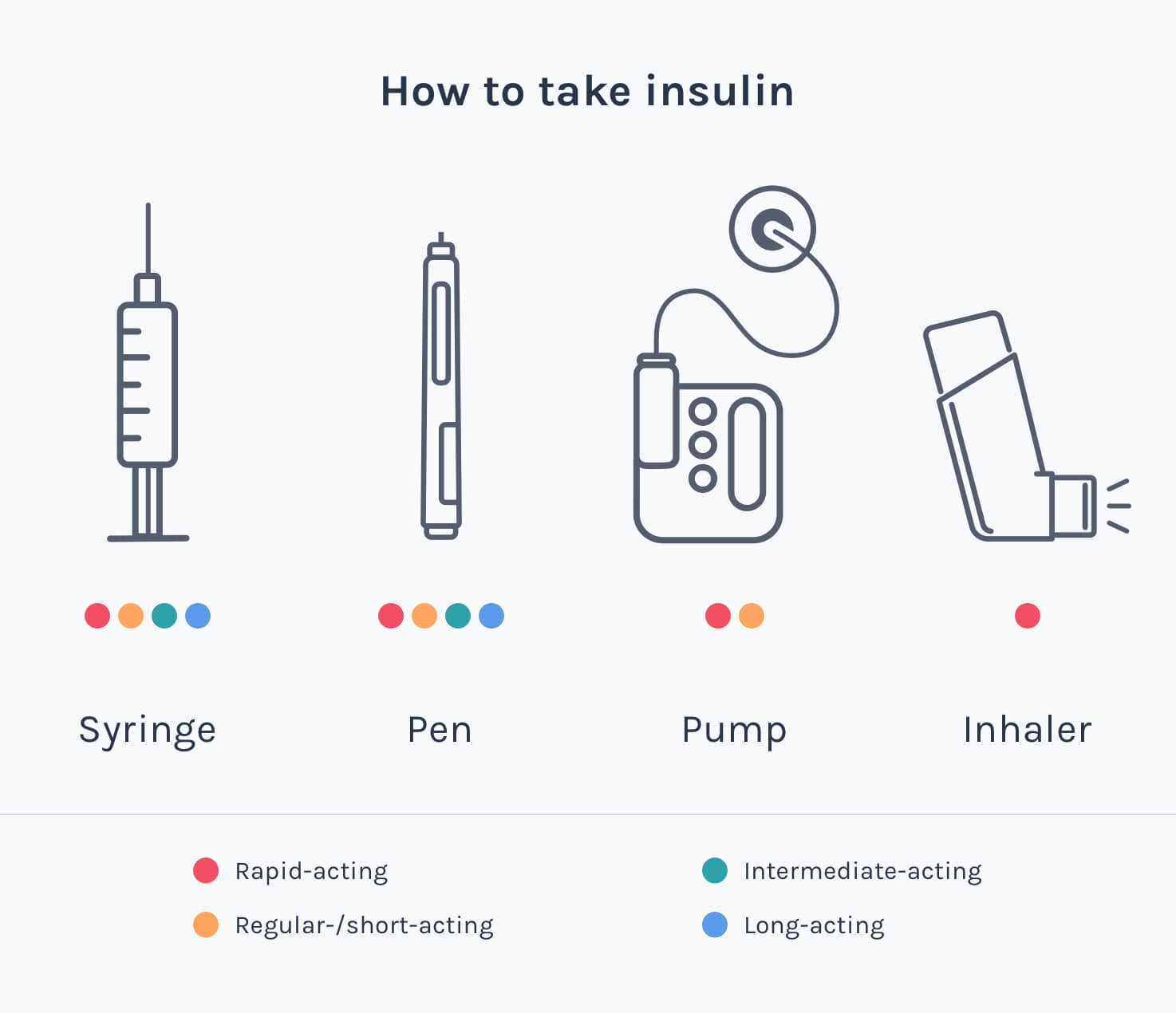 You can also take the medication using an insulin pump – a device you wear that has a small tube (cannula) that’s inserted into your skin. The pump can automatically deliver set doses, and some people find it a more convenient alternative to multiple daily injections. Your doctor or a diabetes educator can also demonstrate how an insulin pump works.

Just as with any medication, insulin can cause side effects in some people. It is important to note that not everyone will experience side effects. These can also vary by person and by brand of insulin.

However, we can summarize the most common insulin side effects as including the following:

Insulin also has the potential to cause more serious side effects. These can include:

This is simply a summary of the side effects that insulin can cause. To find out more, you can read the leaflet that comes with your medication, or you can talk to your doctor.

Is insulin safe for use during pregnancy?

Using insulin during pregnancy is a common concern, but insulin is generally considered the safest diabetes medication you can use when pregnant or when nursing. It doesn’t cross the placenta, so won’t enter your unborn baby’s bloodstream, and it doesn’t pass into your breastmilk. You should talk to your doctor about insulin during pregnancy if you become or want to become pregnant, or if you plan to breastfeed.

How to store insulin?

You can keep the current insulin that you’re using at room temperature to make sure it’s not uncomfortable to inject. Insulin can usually be kept at room temperature for around one month but refer to the patient leaflet that comes with your specific brand of insulin for more details.

You should store any extra insulin in a refrigerator. Make sure you don’t expose any insulin to extremes of hot or cold temperature and keep it out of direct sunlight.

The cost of insulin

Insulin can be a costly monthly expense. The cost of insulin without insurance will vary depending on the brand of insulin you buy and the way it’s administered. Insulin typically comes in pre-filled syringes, in self-injecting pen devices, or in vials to be used in syringes or in an insulin pump. Costs will also vary by retailer.

As a general guide, one self-injecting insulin pen, that can last from around one week to two (depending on the dose you take and the size of the pen) can cost from $80 to $250. The specific price of the prescribed type of insulin with insurance will depend on the terms of your healthcare plan.

If you get your insulin with the help of NiceRx through an insulin patient assistance program, you’ll always pay a flat monthly fee of $49.

Apply online to find out more.

The high cost of insulin has led some people with diabetes to ration their insulin – to use less than they should, so it lasts longer.

This is a dangerous and even deadly habit, as it can make the insulin you take to become less effective than is required. Your doctor has prescribed a dose of insulin that they feel is most suitable for you, and you should always take it as they’ve directed.

Insulin is one medication that can be used to treat diabetes, but there are others. Some of these are used instead of insulin, others can be used alongside insulin. Non-insulin diabetes medications include:

You can also make a range of lifestyle changes that can help treat type 2 diabetes. These include:

Is insulin a hormone?

No, although metformin is used to treat diabetes, it’s not a type of insulin. Metformin is a medication you take to stop your liver from releasing glucose – it helps your cells to absorb glucose more effectively in the presence of insulin.

Does insulin cause weight gain?

Weight gain is a common side effect of insulin. Not everyone will experience this side effect, but some people will. Talk to your doctor if you’re concerned about insulin and weight gain.

Can you get off insulin once you start?

If you have type 1 diabetes, your pancreas produces less insulin, and you may need to take insulin for life. If you have type 2 diabetes, your condition can be reversed if you use diabetes medications, like insulin, and make changes to your lifestyle, like losing excess weight, eating a diabetes-friendly diet, and exercising more. Once your blood sugar is under control, you may be able to reduce your insulin use or stop using it altogether.

What is the safest insulin?

Insulin is the safest diabetes medication for most people with the condition, with all types of insulin considered to be safe. The brand and type of insulin you’re prescribed will usually depend on your insulin requirements, whether you need faster-acting or longer-acting insulin, or a combination of the two.

What are the side effects of insulin?

Novolog side effects and how to avoid them

Novolog is an FDA-approved brand-name medication manufactured by Novo Nordisk. It is classified as a fast acting in...

Fiasp and Novolog are brand names for prescription drugs used for the treatment of type 1 and type 2 diabetes mel...

Whether you have type 1 or type 2 diabetes, insulin injections can be an effective way to help you manage your bloo...

Diabetes is a group of diseases that cause your blood glucose levels to rise too high, harming your health. A range...